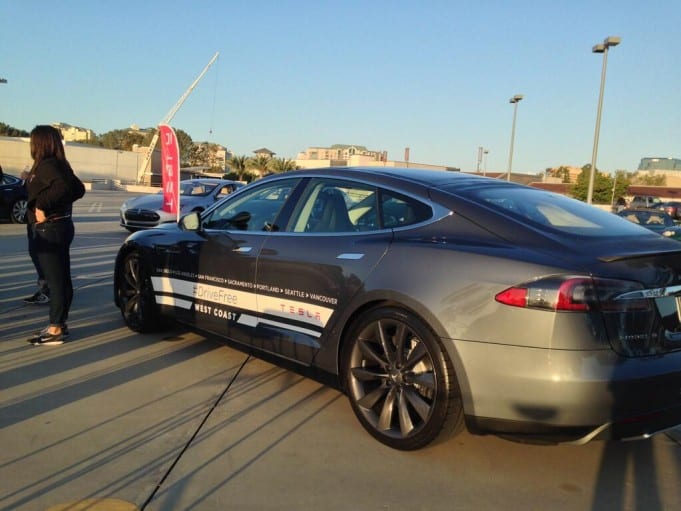 To celebrate the opening of its “West Coast Supercharger Corridor” this morning two Tesla S luxury electric sedans will begin the journey from San Diego to Vancouver. You can follow along using the #DriveFree hashtag on Twitter, and also look for the car which looks like this: 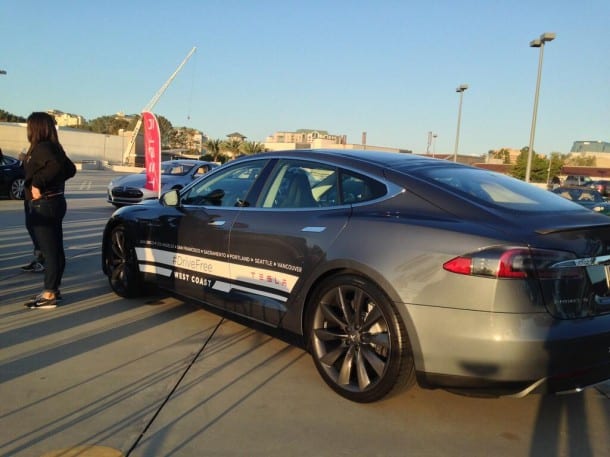 Stops will include Santa Barbara, San Francisco, Sacramento, Mt. Shasta, Portland, Seattle, and Vancouver. According to the announcement, Tesla will host owner and media events along the way.

The 1,750 mile journey would take a standard vehicle sold in the U.S. (23.2 mpg according to 2012 statistics) about 75 gallons of gasoline. At an average of about $3.68 per gallon for regular (87) unleaded here in California, a typical non battery-powered vehicle would cost the owner $276. The same trip made with a Tesla S: $0.

Tesla notes that “more than 99 percent of Californians and 87 percent of Oregon and Washington owners are now within 200 miles of a Supercharger.”

A Supercharger delivers up to 120 kW DC power and can provide half a charge in as little as 20 minutes. Experts say that could be reduced by half within the coming years.

One of the shortcomings of the battery model is charging times. While conventional combustion-based cars can be gassed up in under 10 minutes, a Tesla requires much longer. However, the Supercharger is clearly Tesla’s attempt to turn the traditional model on its ear.

In addition to high electrical throughput and short charging times (compared to home-based charging stations), Tesla has also demonstrated a high-speed battery swap; that would enable a Tesla owner to pull  into a station and, without leaving the vehicle, have the depleted battery system removed from the bottom of the car, and replaced with a fully charged one. So far, there’s been no commitments on when we can expect that swap-and-go type ability to arrive.

This is what the #DriveFree Model S looks like, so if you’re on the West Coast, keep your eyes peeled! #DriveFree pic.twitter.com/NskJjGBebU

To already have a network of chargers in place along the entire U.S. west coast is an astounding feat, especially for a company that in its early days teetered on the brink of bankruptcy. I had the good fortune of touring the Fremont factory. It’s an impressive operation–each and every operation and process is scrutinized, re-evaluated, tuned. Walking away from the factory, as new Tesla S owners silently turned on their new vehicles, I came away convinced that this was the way forward.

Even in a world of Apples, Googles, and Amazons, I’ll say this:

Tesla is, arguably, the most innovative company on planet earth.