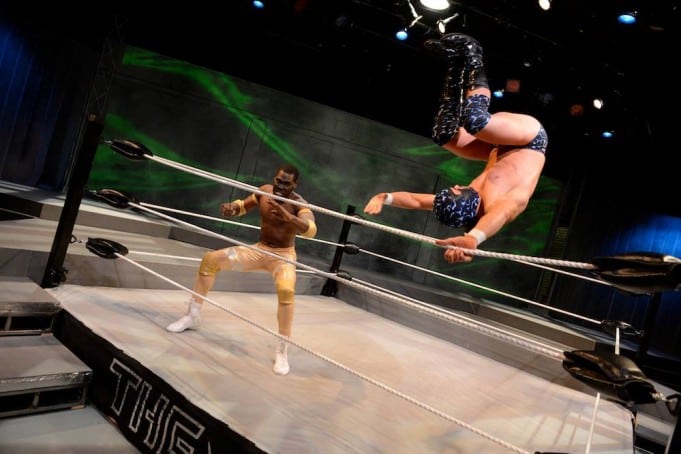 The Elaborate Entrance of Chad Deity

Before anyone starts comparing the San Jose Stage Company production of The Elaborate Entrance of Chad Deity with Aurora’s 2012 production, let’s get this out of the way. San Jose Stage, in association with the Capital Stage Company, offered up an electric, fast-paced, gripping production. If you think you’re too smart or too liberal for World Wrestling Federation, just get over it. This is one of the smartest, funniest, new shows making the rounds. If you think you’re too good for wrestling, come to this show. If you think you know something about race and complicity, come to this show. If you feel disconnected from theatre, you should especially come to this show. There’s a reason that The Elaborate Entrance of Chad Deity Pulitzer Prize finalist in 2010 and an Obie winner in 2011. The San Jose Stage Company does this material proud.

Andrew Perez is a big part of what makes this show work. As underdog and narrator Macedonio (Mace) Guerro, his lightning patter combines wisdom with pathos. He may not be as big as Chad Deity. He may not be as loaded as fight promoter Everett K. Olson (Randall King). He may be more complicit than Vignesh Paduar (Jaspal Binning). Notwithstanding all of that, he brings plausibility to the preposterousness of wrestling that he gifts to everyone else on stage.

OK – now we can move on to the comparisons. This production was distinctly different from that at the Aurora. For starters, only videos of the powerbomb, a theatrical wrestling move that eliminates the competition, appeared in the first act, which initially seemed a little cheesy. Be patient. This show builds slowly. You’ll get the live powerbomb and more in Act II. In retrospect, this slow buildup works well.

Secondly, this was a very different Chad Deity. Yes, they were both huge. Yes, they were both black. However, the Aurora Chad Deity was cut from the same cloth as Shaft.  He delivered his lines with a cool that was as impenetrable as it was ridiculous. Oozing with narcissism, he was just waiting to be toppled. Donald Paul was a very different Chad Deity – one who vacillated between silly and scary.

Lastly, small script changes, including references to the San Jose Sharks and Mitt Romney, gave the sense of trying too hard.

I’ll close with a bit of dialogue from Mace.

“People love the powerbomb. They love the lower, the beauty, the implausibility of it. They know that it takes two people to pull that beautiful bullshit off, and they love that it takes two people to pull it off. There’s community in that move and somehow the people know that me and this genius are uniting to make it look like he’s murdering me, when in actuality I’m doing what I can to make him look like the all-world fighting machine he’s made out to be and he’s doing all he can with his limited capacity to make sure I don’t break my neck, and so at the bottom of what we’re doing is we’re both trying to ensure that neither one of us gets hurt. That fact is powerful and beautiful and, like I said, one of the most profound expressions of the ideals of this damn nation.”

With a script like that, what can you do, but root for Chad Deity?