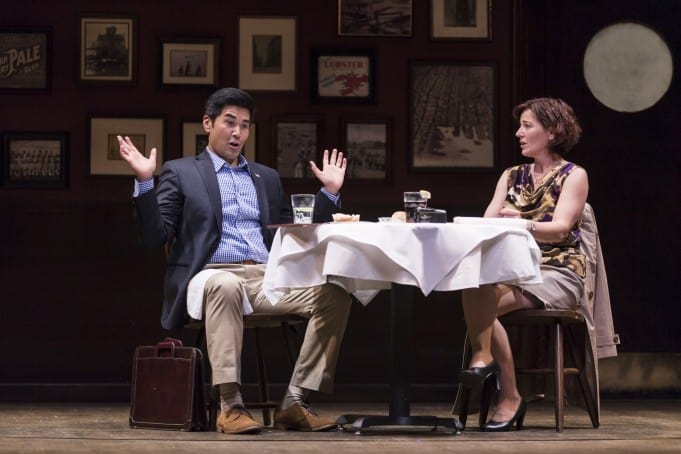 The title “Warrior Class” conjures images of the Chinese terra-cotta warriors. Buried with Emperor Qin in 210 BC, they speak to a nobility of a warrior class. While playwright Kenneth Lin’s characters don’t navigate the distance between terra-cotta warriors to politicians, this TheatreWorks production does travel the distance between a decent man and a political stooge.

Lin’s created that most unlikely of beasts: a play that unwraps itself slowly and thoughtfully with nary a slow moment. This drama moves fast. I suspect I was not the only one startled when the houselights went up, signaling intermission. This is a good thing though, because Warrior Class feels like a potboiler you just can’t put down.

Julius Lee (Pun Bandhu) is billed as the “Republican Obama.” A New York assemblyman with an eye to something bigger, he got into politics through the unlikely path of being a good guy with no ax to bear. All we really know about him is that he’s from an immigrant family and he catapulted to the national stage after making a speech, just like Obama after the 2004 Democratic convention. When we meet him, his wife has just had a miscarriage. When we see him, he’s almost always in his kitchen, which gives him an unlikely plausibility. He dreams of committee assignments that serve some general good.

Nathan Berkshire (Robert Sicular) is a smooth political fixer. Ostensibly working to prevent Lee from being tarred as another Asian in the mold of the perpetrators of the tragedies at Virginia Tech and Binghamton, he’s a means-satisfy-the-ends guy. At the outset, we don’t entirely trust him because we know he comes with his own agenda. How this agenda changes lies at the heart of the play.

Holly Eames (Delia Mac Dougall) is an college girlfriend of Lee’s who still carries baggage from their breakup and is looking to be bought off.

Part of why this play works so well is that Lin isn’t aligned with any of his characters. He maintains a distance from them that allows the play to unwrap organically. You can easily leave the theatre trying to plumb details of the relationship between Eames and Lee.