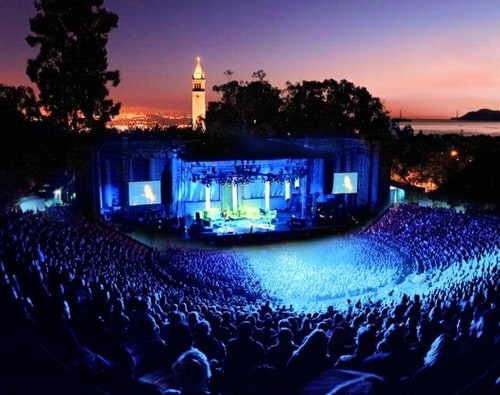 Writ large in the program, the words were shocking: “Plácido Domingo – Baritone.” The Oxford Music Encyclopedia asserts that Placido Domingo is the “leading lyric-dramatic tenor of his time.” Even the NPR Encyclopedia of Classical Music ensconced on my desk defines him as a “Spanish tenor, conductor and administrator” who has the “largest repertoire of any tenor in the history of music.” Those who don’t follow opera closely might  suspect that they’ve had it wrong all these years. Who knows?  Maybe it was two tenors and a baritone after all…

Not to fear: his appearance at the Greek Theatre  quickly revealed that Plácido Domingo is going as strong as ever. While I wasted a few braincells characterizing songs or parts of songs as one thing or the other, that exercise was quickly abandoned. From the very first notes, the power, depth, tessitura (texture), and color of his voice made other perfectly competent voices seem pedestrian. My fears that this concert might be the operatic analogy to an aging Frank Sinatra. Whatever changes his voice may be undergoing, they seem to be for the better, bringing more smoke and color.

Interspersed between Domingo’s solo numbers were various duets and trios in which he was joined by sopranos Angel Joy Blue and Micäela Oeste, who also offered up individual solo numbers. A collective shiver ran through the audience at the enormous power that Blue put into the opening syllables of “Dich teure Halle,” from Tannhauser. By way of comparison, Oeste’s voice sounded a little thin at the outset, but this steadily improved as the evening progressed.

The audience went wild, with fists pumping in the air as if it was a rock show.

The program itself was well-structured, reserving songs like “Tonight,” “I Could Have Danced All Night,” and “Some Enchanted Evening” for the end and devoting the beginning to pieces from Andrea Cheniér (Giordano), Roméo et Juliette (Gounod) and La Traviata (Verdi).  A duet from Verdi’s Il Trovatore  provided some of the most intense moments of the evening, with vocal pyrotechnics from Blue as Leonora and Domingo as the Count.

The program also recognized the 200th anniversary of the births of  Wagner and Verdi. Thus, the evening opened with the Berkeley Symphony playing the “Overture” from Die Meistersinger. Works by Verdi were featured later. It’s easy to dismiss the Berkeley Symphony, flanked as they are by the SF Symphony and the Philharmonic Baroque Orchestra. However, they’ve been there for some of symphony experiences that linger longest in my memory, such as the Paul Drucker concert a year ago – and certainly this evening’s offerings. Under baton of guest conductor Eugene Kohn, they sounded exceptional.

The Plácido Domingo concert blew me away, in part, for some of the same reasons as the Goat Rodeo, with Yo-yo Ma, Edgar Meyers, Chris Thile and Stuart Duncan. The Greek Theatre is a perfect venue for music lovers. The imaginative camerawork displayed on the two large screens made me wish that Davies Symphony Hall had something similar.  While the crowd had a delicious informality, all you had to do was listen to the audience belting out the Italian lyrics when Domingo invited everyone to join him to appreciate these  were  serious music lovers. Gone was stuffy feeling of so many  classical music venues. Watching the musicians clown on the stage, and the audience roll with it, these concerts seem like miracles out of time. One had the feeling of being at  an 18th century Italian opera buffa, in the the audience response was an expressive and the performers. Those classical music fans who speak of China saving the classical music scene might take heart at the enthusiasm these events engender.

ALSO SEE: Theater Review: ‘After the Revolution’ in Berkeley

The audience went wild, with fists pumping in the air as if it was a rock show. In response, Domingo, Blue and Oeste offered up at least four encores and multiple curtain calls, as if to extend the night as long as possible. This was indeed a long concert, running nearly three hours.