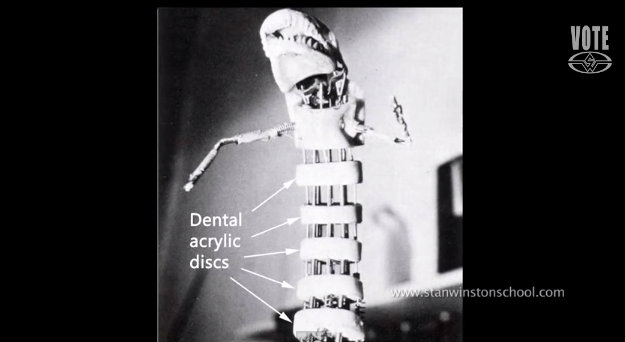 One of the most memorable scenes in modern cinema takes place in Ridley Scott’s Alien. Though it was shot thirty five years ago, when a baby alien bursts out of actor John Hurt’s chest the shock was grandiose.

Theater-goers jumped out of their seats, mortified.

This was not supposed to happen. It could not happen. But it was, and right before our very eyes. Event today the effect holds up perfectly well – testament to an era when taking us to outer space (Star Wars 1977), or making us fear a shark (Jaws 1975) required a different kind of non computer-based innovation. Without CGI, and without the aid of so much modern effect wizardry I can’t help but wonder if that bygone era was better served by it, arguably, more artistic approach to making us believe.

The Stan Winston School has posted this short, riveting behind-the-scenes look at the famous “chestbursting” scene. FX maestro Stephen Norrington lovingly recalls building the mechanism used for the sequel, Aliens (and also, presumably similar to the one used in the original):

His goal was to capture “organic” movement and relay emotion. That he was able to so successfully achieve it with simple wires, acrylic discs (used in dentistry), and teflon liners is remarkable. The whole was, indeed, greater than the sum of its parts, which Norrington says, “is always a good thing.”

Regarding how the industry has changed over the years we can perhaps infer from this great line he uses to describe his approach to building the mechanism: