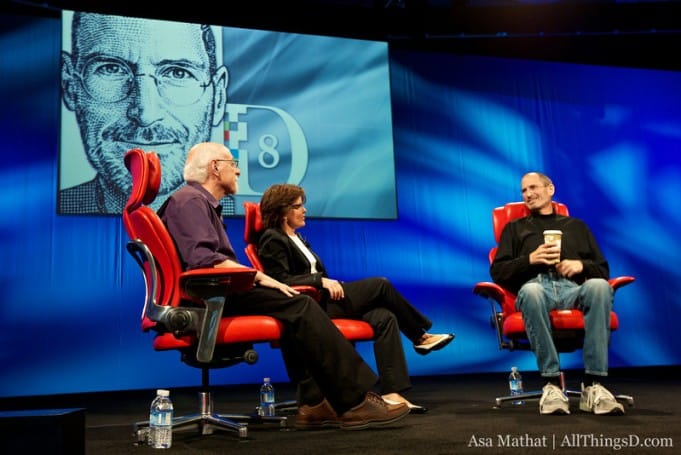 Big news in tech today (well, technically it broke last night), and I’m not talking about that Gold thing designed by the lunatic with the axe.

AllThingsD, the quality tech reporting organization and blog that had partnered with The Wall Street Journal (News Corp.), is parting ways with its marquee reporters, Walt Mossberg and Kara Swisher.

That the story is receiving so much attention across so many outlets is testament to the huge impact AllThingsD and, in particular, Walt and Kara have had (and will continue to have) on the industry.

Estimates peg revenue of the AllThingsD web site in the $3-4 million range, most of that from ads. The annual AllThingsD conference, however, is the real gem, taking in nearly $3 million in ticket revenue ($5,500 each). And that doesn’t even include the $400,000 pops that companies such as Oracle, Salesforce, Sony and others pay to sponsor the event.

Pandodaily has a good read–and one of the best headlines–on what it all means for the parties involved:  “In AllThingsD divorce News Corp gets the house, Walt & Kara get the kids”

Essentially WSJ opted not to renew agreements with the dynamic duo (and presumably, by extension, the rest of the staff). The contract expires at the end of 2013. Interestingly, the “AllThingsD” brand will stay with WSJ, and, according to reports, get retooled. One could infer that management decided the brand was more valuable than the talent; hard to believe considering that Walt and Kara are widely regarded as the gold standard for tech reporting, having built AllThingsD into the de facto brand.

CLINT IN SILICON VALLEY: Apple iOS 7 – Brought to you by a Lunatic with an Axe

Perhaps the management at Dow Jones feels the need to re-energize with a Buzzfeed, or HuffPo shock-and-awe, quick-hit style that targets a younger demographic (i.e. millennials).

Could it be–and it pains me to think this could be the case–that age has something to do with the decision?

The real reason likely comes down to money. Each side surely wanted a larger cut.

What happens next should make for grand spectator sport; well, at least for those of us who enjoy occasional insider baseball.

There’s been no shortage of high profiles moves in publishing lately. AOL bought The Huffington Post in 2011 in a deal worth $315 million. This year, Amazon CEO Jeff Bezos purchased the Washington Post for $250 million. Yes, there’s still exit money to be had in publishing, at least for the big players. In tech, Vox Media’s The Verge was the highest profile tech blog launch that I can recall – because it’s private we don’t know its valuation or revenue.

Word is that Swisher and Mossberg want to start a new tech blog and have been soliciting $30-40 million in investment. If that number were to come true, a large part of that valuation would be a result of the successful annual conference the two co-chair. The problem that I see, though, is that event is synonymous with the AllThingsD brand which, as we know, they will not be able to use going forward.

I’ve attended several events for Stark Insider here in Silicon Valley where the ATD team was on the ground reporting. They’re a great, hard working crew. Kara is one of my favorite moderators. And though I chided her on at least one occasion at a Churchill Club event for sitting on her chair cross-legged and wearing green pants during high profile interviews, her personality and sharp wit (as evidenced on Twitter) are a welcome addition to the tech community.

TechWhip perhaps said it best in their “translated” version of the Dow Jones press release which was completely redacted, and replaced with this plain English version:

We are angry and quite a bit butt-hurt that those young turks – Kara and Walt – would dare to think they could live without us. Our pride means we have no choice to but to try and crush them by copying their business model and throwing a boat load of money at it. This has often failed for us in the past but we’d rather stick with our established modus operandi than actually try and understand this strange new digital world we find ourselves in.

We expect our copy-cat operation to rank up there with the glorious successes of our other digital ventures, like MySpace, The paywall at the Times of London and our innovative tablet magazine ‘The Daily’ (launched by Steve Jobs himself).

Wherever they do land, I hope they continue to uphold the standards they’ve so tastefully (and often, so humorously) created for tech reporting. In the tech blogosphere there’s no shortage of snark, cut and paste, and shallow “leak” reporting. Along with The Verge, Kara and Walt with the AllThingsD team, transformed our expectations of what it means to be a quality independent publisher.