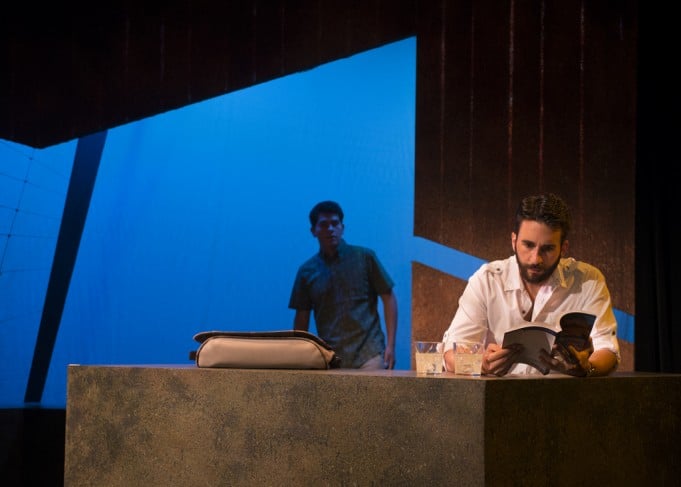 With American Dream, playwright Brad Erickson creates characters that live on in your head. The day after, I found myself variously rolling my eyes at them and smiling. They make you genuinely hopeful, which is rare enough, but you might also want to throttle the playwright for moments of misogynistic cruelty. This is a long-winded way to say that this play, now running at New Conservatory Theatre in San Francisco, is very good; it will haunt you for days to come.

I didn’t anticipating liking American Dream. The press release was heavy on the political, mixing LGBT issues with immigration ones. Given that we’re inseparable from our politics, I feared something cartoon-y, heavy-handed, and overstated. Erickson was way smarter than that, letting the story be driven by the characters and the boundaries between them.

Tom (William Giammona), newly divorced after twenty years of marriage, is negotiating new relationships with the giddiness of a newly authentic self. His naivete, enthusiasm, hesitation, and clear vision are imbued with an infectious optimism that it just might be possible to redeem oneself by taking on a whole new self in mid-life. You hope with him, learn with him, and are entertained by him.

The aptly-named Salvador (Ulises A. Toledo) has a life in language. Any writer will love this character, whose identity and hopes for the future are embedded in verb tenses and for whom the transitive is blasphemous. Until Tom arrives, Salvador lives with himself easily, having made the necessary compromises that allow him to navigate diminished expectations on the southern side of the border.

Cara (Dana Zook) is a more difficult character, almost as if she is two different people in Acts I and II.

In Act I, we see her cheerfully working through the post-divorce child care arrangements she didn’t want, advancing her career in leaps that would make anyone jealous, and seeing an attorney who lives in a house that Tom designed. She copes with her ex-husband’s crossing the boundaries of their marriage with an ironic, but loving acceptance. In Act II, we see a different Cara, one who is psychically bullied by Tom and her teenaged daughter (Katherine Robbins), who both demand she let go of her past. Even her attorney boyfriend adopts a paternalistic role, manipulating situations to create an outcome “for her own good.”

That said, American Dream is a fast-paced creation that moves easily across both sides of the border. Scenic designer Kuo-Hao Lo created an ingenious set that was angular, marked by juxtaposed planes that subtly created different performance areas on the small stage. Fabric textures and lighting drew the audience in without overwhelming.