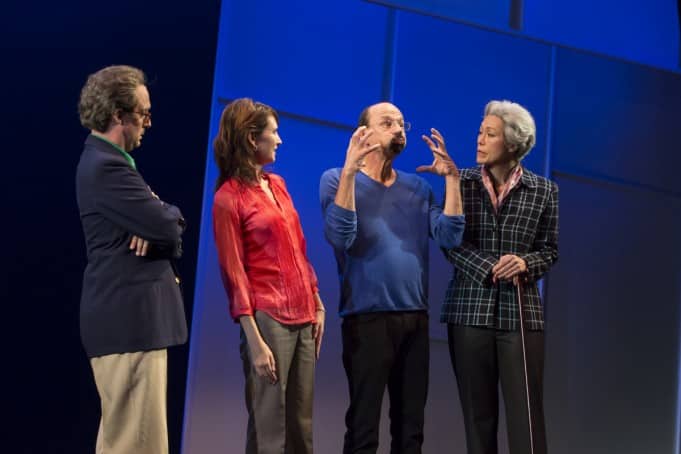 The Loudest Man on Earth

In many ways, theatre is all about honesty. Poor acting or bad stage direction are just ways of saying that the performance wasn’t honest, wasn’t true to character. The Loudest Man on Earth (TheatreWorks Silicon Valley) elevates this idea by having deaf actor and director, Adrian Blue, perform using American Sign Language (ASL). Blue and the other characters of Loudest Man stayed in my head, insistently nagging and pulling at my attention the following day, as I mulled over what worked and what didn’t in this stunning performance.

The tone is light and gently humorous with the feel of When Harry Met Sally.

American Sign Language goes beyond using the hands to communicate – it involves eye contact, facial expression, gesture, and 1001 nuances that bring communication alive. While replacing tonality with muscle expands the tools at the actor’s disposal, it also ups the ante because false moves become more apparent. The issue becomes even more compounded when the play is largely about missed connections.

Authored by Blue’s wife, playwright Catherine Rush, this romantic comedy brings Adrian Blue together on stage with Julia Fitzpatrick, who plays his wife. Blue is a fascinating actor to watch, not the least because he’s the sort of guy you’d look at twice in the subway. Here we see him, in daily life as interpreted by Fitzpatrick, and as a solo man on stage, composing monologue-type letters. In his anger, in his creativity, and in his love, Blue becomes larger than life. His on-stage solos aren’t always comprehensible to an audience that’s only just becoming acquainted with sign, but that only mirrors the missed connections occurring on stage.

Cassidy Brown and Mia Tagano perform the other 21 minor roles of friends, parents, cops, and doctors that cycle through the lives of Fitzpatrick and Blue. These other roles are each so unique and different, it is hard to imagine they are performed by only two actors. In many ways, the burden on Brown and Tagano is even heavier than that on Blue and Fitzpatrick.

Although watching missed connections on stage could be difficult, this work is as much a romantic comedy as it is about deafness. For the most part, the tone is light and gently humorous with the feel of When Harry Met Sally. Hearing Blue and Fitzpatrick go after the cockroaches in their apartment could have easily been the lobster scene in Annie Hall.

My only issue is with the the script; it seems to pack too much in to make a point. Moreover, the scene with the cops at the door didn’t ring true, because cops never show up in NYC, at least when I lived there. However, for the most part, Rush let the Blue be Blue, which more than made up for these small nits.

The Loudest Man on Earth plays the Lucie Stern Theatre in Palo Alto through August 4th.