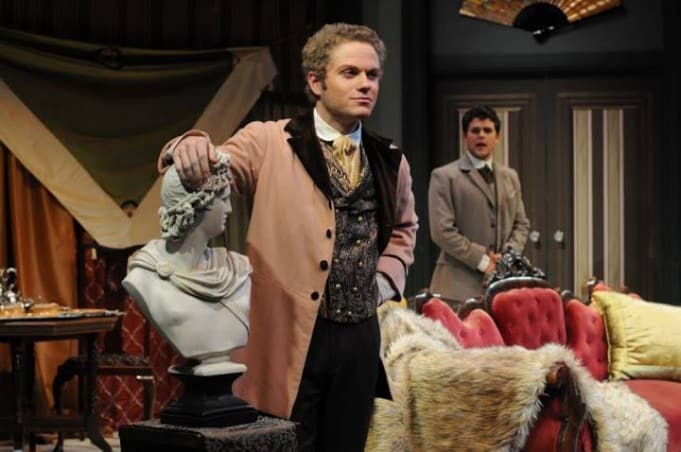 The Importance of Being Earnest

The Bay Area clearly understands the importance of being earnest – particularly the south bay, which entertained TheatreWorks’ recent remake of Importance of Being Earnest as a Carnaby Street musical last spring, and Stanford Summer Theatre’s more traditional version, which just opened this week.

All the earnestness is a good thing, as the lack of Downton Abbey leaves many of us jonesing for good Brit entertainment.  If you substitute the bromance and romance of Ernest, for the upstairs and downstairs of Downton Abbey, you might find yourself reasonably satiated, especially by Stanford Summer Theatre’s (SST) production.

SST’s production was remarkable for many reasons, not the least which was the attention lavished on costume and set design. The set of the Stanford Summer Theatre production is a lush, richly appointed Victorian sitting room the perfect silver tea set and cut glass sherry decanter. Where did set designer Erik Flatmo ever obtain such an exquisite red crushed velvet period couch?

These exquisite surfaces parallel the tight witty dialogue peppering this farcical play. Sincerity and depth are sacrificed for style in this self-described “trivial comedy for serious people,” but you’ll hardly miss them because director Lynne Soffer kept the repartee coming non-stop, with nary a lull in this long two-intermission play. 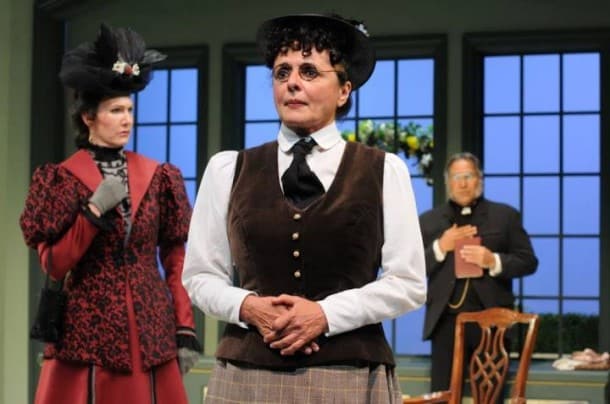 This characterization aside, the bromance made in heaven between Jack Worthing (David Raymond) and Algernon Moncrief (Austin Caldwell) was hardly trivial. Caldwell’s Algernon bounced between insouciant petulance and the brittle wit of the chronically self-assured.  He was a perfect foil for Raymond’s Jack Worthing, who felt the tug of various responsibilities (not the least of which was his ward, Cecily). These two played off each other brilliantly as each attempted to get his girl.

Courtney Walsh’s performance as the fearsome Lady Bracknell was pitch perfect. Tipping a hat to the tradition of using female impersonator to play Lady Bracknell, the female Walsh pulled off the ultimate gender-bending feat and played it as a woman playing a man playing a woman. Upon reflection, maybe that’s where the balls to wear her show-stopping hats came from.

This production was so well done that it’s important to remember what SST is – and what it isn’t. SST is decidedly not your usual student theatre, as it pulls in luminaries such as Marty Pistone, Don DeMico, and Kay Kostopoulus, among others.  Rather, SSF is a gift to the community, with two productions, augmented by an all day Continuing Studies symposium about Wilde and Becket. Couple this with their weekly Monday film showings, and it’s possible to do nothing else all summer but SST.

The Importance of Being Earnest is on stage at the Pigott Theater at Stanford through August 11.