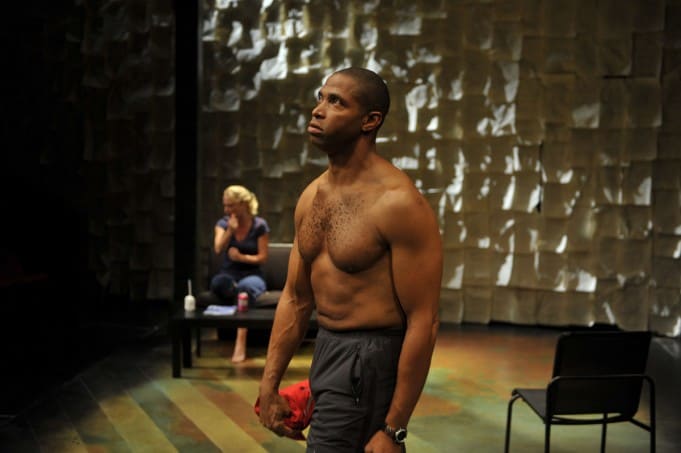 This is How it Goes

Good theatre takes up residence in your head, unwrapping itself slowly – both on stage and in your mind the next day. A good example is This is How it Goes, the Bay Area premiere of a work by Neil LaBute.

LaBute is an unsettling playwright who traffics in race, violence, sex, the unspoken. This is How it Goes is no exception.  Dialogue is occasionally so extreme that silence grips the audience for minutes on end. The only indication that time is moving forward is the action on the stage.

Part of what makes This is How it Goes some of the smartest theatre of 2013 is that the three-person cast includes some of the best Bay Area actors around. Take, for instance, Gabriel Marin. Marin’s roles are often beta males – a little too eager, not too bright, likable all the same. At the outset, he plays the same role here, albeit as a rube who doubles as narrator. His persona was irritatingly false, making me wonder what’s up. While Marin indicates he might not be the most reliable narrator, he wins your trust by presenting multiple takes on an event. Sometime later,  the ah-hah hits, and you realize that the apparent falsity was some of the best acting Marin’s ever done.

As Cody, Aldo Billingslea’s character is Marin’s polar opposite. He’s the black to Marin’s white, tall (6’4”) to Marin’s short, direct as opposed to fumbling, and with a searing intensity that commands the stage. Billingslea doesn’t have to do much to hold your attention as the thrum of violence begins when he walks into the room. While there’s nothing even vaguely sympathetic,  we don’t discount him, largely because of Billingslea’s nanoseconds of unpredictable softness.

Kicking off the season with the Elaborate Entrance of Chad Deity and closing with this play demonstrates that the Aurora isn’t afraid to deal with the multi-dimensionality of race. LaBute’s work is a perfect vehicle for this as the audience was as stunned by Cody’s violence as they were by Marin’s beyond-the-pale comments. Indeed, according to a 2011 interview in The Independent, LaBute remarked that it isn’t the racist joke that interests him as much as how the characters justify it.  It’s these type of justifications that produce the compellingly difficult characters in This is How it Goes.