One commonality of good theatre – and almost any good fiction, for that matter – is it teaches about the world by taking you out of it. Placing universal dramas in a different context provides the distance to look at them anew.  By de-personalizing, you come full circle and take them to heart, owning them once again.

For this reason, plot discussions lose audiences by allowing them to react against things that might not appeal. For example, characterizing Barbara Kingsolver’s Poisonwood Bible as a novel about European imperialism, Christianity, Africa or coming of age would lose those readers who find any of those things tedious. Not only would the book fail to find a home, the reviewer would miss the point altogether. 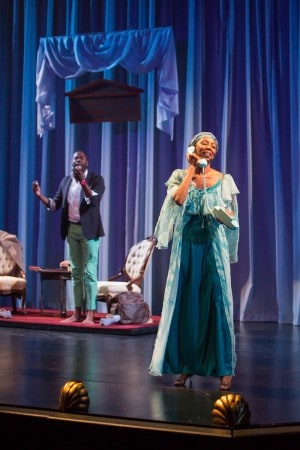 Wild with Happy proves this point. The all-black, mostly gay characters differ from most audience members at the Mountain View Center for the Performing Arts. Writer and actor Colman Domingo created a play that is foreign to this particular audience, and in doing so, reveals truths about love, death, falling apart and coming back together that are universal.

I’m making this sound far, far too serious, because Wild with Happy is a funny, funny work, with a huge sense of style, and dozens of laugh-aloud moments. In many ways, the snappy word play such as Aunt Glo’s references to social media like “Spacebook” and “twitching” is a writers’ dream.

This small miracle would be impossible to pull off without a brilliant cast. As the central character Gil, Colman Domingo (who also appeared in the Spielberg’s Lincoln) delivers up a caustic wit that you would love to take home. Sharon Washington plays both his dreamy deceased mother who purchases a Cinderella doll just before she died, and his high-voltage harping aunt. Washington and Domingo not only know these characters, but have deep compassion for them. The high-energy performances of these two fill the entire stage, eliminating any sleeper moments throughout the play.

This compassion extends to costumer designer Brandin Barón, who developed the true shocker – a 1970’s wardrobe that isn’t an affront to the dignity of the characters.

This show closes out the 2012-2013 season and is well worth taking in. The energy of this piece, along with the non-stop verbal riffing throughout these  characters’s  journey  will leave you wild with happy.