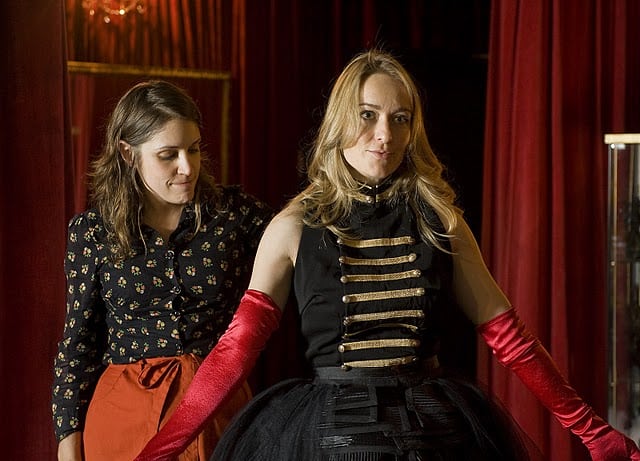 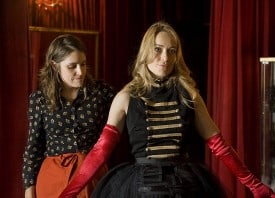 My interest in the Philip Glass opera, Orphée, was first piqued when the telltale red and black placards started making their appearance in coffee shop windows behind Davies Symphony Hall last month. February 26th rapidly became the most circled date on the calendar for the Bay Area’s thriving opera community.

I can sympathize with those who look critically at Philip Glass. Prior to Saturday night’s SF premiere of Orphée, my innate skepticism made me take one step back from someone so uncritically revered. I agreed with critics who panned his work with Leonard Cohen at Stanford last year. However, thanks to last night’s performance, Glass made inroads toward my heart. With a bit of luck, this opera may have the staying power as some of the great ones, and hopefully, we’ll have the opportunity to see it again and again.

Looking first to the orchestral score, Glass displayed a relentlessness that kept pushing the plot forward with sweeping chromatic passages. The lyrics were taken, almost hook, line and sinker from the 1950 Jean Cocteau film. However, the time signature of the orchestral score played against a differently measured vocal score. This technique worked invisibly to push things forward, creating an urgency that might have been otherwise lacking. Given the speed at which things took place, this was clearly not your mother’s opera.

The stage opened with brief video integration spanning five strategically placed mirrors, in which Orphée’s introduction (je m’appelle ….) was cunningly deconstructed. Visually, this was engaging – and also very short. Action rapidly moved to the café dispute in which Orphée’s fellow poet was killed. With the entire orchestra on stage, dramatic action was limited to the few square meters at the far right. This worked if you seated on the right side of the theatre, but failed miserably if you were on the left. Not only were the vocals drowned out by the orchestra, the audience had to scan back-and-forth between the centrally-placed subtitles and offstage action. I gripped my opera glasses for all they were worth because the exquisite makeup of the café brawlers added an intensity that could not be passed on. I fear the impact of this artistry was dampened, given the remoteness of the action. Fortunately, this disjointedness, passed quickly when the orchestra descended to the pit, and the singers were free to take center stage.

Once on the center stage, the drama focuses upon Orphée, played by baritone Eugene Brancoveanu, and his catabasis – or descent to the underworld. Thousands of years of world literature, beginning with Gilgamesh, show that you just don’t get off scot-free when playing with those deeper chords. Compromises get made when balancing mortal love with immortality, even for poets such as Orphée. These are the elements that Glass plays with, bringing them to a post-WWII world and infusing them with a fresh modernity.

Orphée’s love for both the Princess, his conduit to the underworld, and his mortal wife Eurydice, provide the tension that drives the story forward. However, tenor, John Duykers, who plays the Charon-like figure Heurtebise, chauffeuring Orphée and Eurydice between worlds nearly stole the show. Duykers first premiered this role in 1993 at the American Repertory Theatre. At 66, with thinning grey hair, he brings a depth and maturity to this role that have an emotional resonance inconceivable in a younger man.

I had the good fortune to steal a few hours watching Cocteau’s movie before hand. While the costuming and actors look far different from this gem, they retain the feel of the film, as well as much of the verbatim script, itself. The ending – at least according to the synopsis – is very different. however. This difference creates an unresolved ambiguity, not the least because the action on stage becomes incomprehensible toward the end. Just why Orphée is tortured by the Princess is unclear. Is this a sacrificial rite so that Orphée can be sent back to his wife? How could Orphée possibly make sense of this experience and why is the Princess doing this?  Moreover, what happens to Heurtebise, that sad, “slave of death?”

Collaboration with the San Francisco School of Circus Arts led to spellbinding moments. I was unfamiliar with the roué cyr, a huge acrobatic hoop, of which David Pozanter is the clear master. Other circus artists performed in this Act II portrayal of the underworld, in which people repeat what was familiar to them in life. The Ensemble Parallèle and director Brian Staufenbiel walked a fine line here: as spellbinding Pozanter’s performance was, it did not cheapen the integrity of the overall story.

We’re blessed here, in SF and environs, to have such a thriving community for both new and old operatic works  – and we’re even luckier that new works such as this one thrive among imaginative renditions of older standards. We bring traditions forward while simultaneously creating new ones. I wish Orphée were in town for more than two days, as it merits additional viewings.