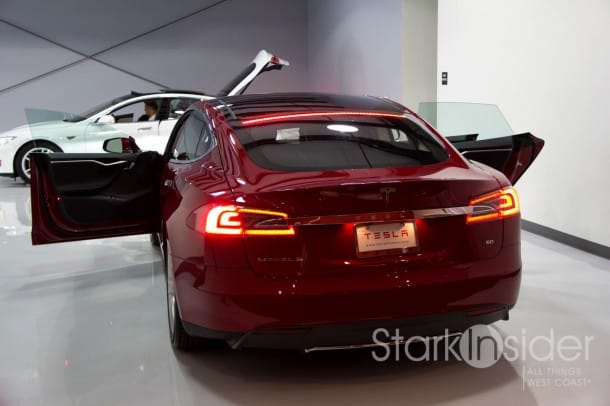 This week was about as good as it gets for Tesla. First, the electric car company announced its first ever quarterly profit. That bit of positive financial news, which resulted in a nice pop for the stock (NASDAQ: TSLA), was followed by a Consumer Reports review that awarded the Tesla Model S sedan a score of 99 out of 100 – their highest score ever for a car.

By way of comparison in the electric car category, the Toyota Prius received a score of 80. Chevrolet Volt, 68. Nissan Leaf, 69.

Stark Insider readers will know that I’m a huge proponent of Tesla. We need this kind of innovation in the auto industry. We need entrepreneurs like Elon Musk pushing the envelop. And we most certainly need avenues to ween ourselves off standard combustion engines, or at least produce alternatives.

I recently toured the Tesla factory and came away impressed with the abundant levels of innovation. Three experts from CR (as seen below in the video discussing the S) note that the team seemed to question every single aspect of what we’ve come to expect from a car; not merely the fact that it’s battery powered. For instance, the door handles, as I discovered, gracefully slide out from the doors as you approach the car before returning flush during driving to enhance aerodynamics. The car automatically locks depending on your physical location. There is no need to “start” the car – simply choose a gear and drive.

But what surprised me most–and I think auto reviewers in general–is the performance of the car. It’s sublime. Unexpectedly so. Typically, the expectation is that electric cars sacrifice normal driving enjoyment in lieu of a green story. Gas mileage is paramount – witness the Nissan Leaf and Toyota Prius (my daily driver). With Tesla, forget about all that. As I drove a gorgeous red model (optioned out at about $81K) up and down Highway 101 in Silicon Valley, I realized something: The Tesla S sedan changes everything. I know it’s cliche to say, but it does indeed drive very much like a slot car. Or, as others have said, like a Porsche (Panamera might be a good comparison point). Electric cars are not supposed to perform as well as the Tesla! The only thing missing is, of course, a deep sports car growl. Maybe Musk and his team will add that to a future firmware upgrade. We could “theme” our Tesla’s noise characteristics: luxury quiet (Lexus), sports car (Porsche), road monster (Bugatti), etc.

Watch as the Consumer Reports team talks and raves (for almost 20 minutes no less) about the Tesla S sedan: