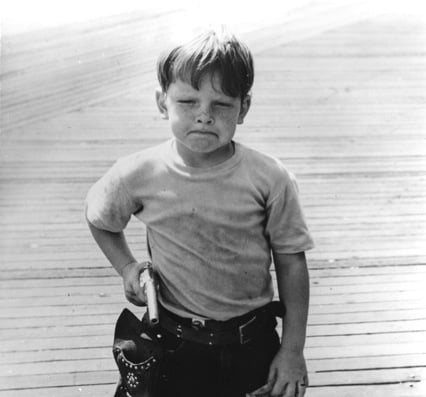 4.5 out of 5 stars - 'Right on the Money'
Written and Directed by Ray Ashley, Morris Engel and Ruth Orkin
Music by Eddy Manson
Photographed by Morris Engel
Review by Clinton Stark

Little Fugitive is largely regarded as the film that ignited the independent cinema movement. Shot in 1959 in black and white, using only a 35mm camera and amateur actors, the work stands up remarkably well even five decades later.

The story is a charmer. A seven year-old-boy is tricked into believing he’s shot and killed his older brother. Distraught, he flees the neighborhood, and heads for Coney Island. There we experience the magic of childhood–candy floss, the beach, parachute and horse rides, comics and baseball, and carnival games.

I had the opportunity to screen a remastered 1080p Blu-ray transfer of the classic Little Fugitive on a on a 120-inch screen. Thankfully The Museum of Modern Art had preserved a 35mm print. Even with a 1.33:1 aspect ratio (television), Morris Engel’s camerawork is expansive, artistic. There’s a whimsical quality to the presentation. Sans tripod or fancy gear, Engel manages to evoke a wide range of emotions. By choosing to occasionally place his camera low, the fairgrounds at Coney Island loom large; the adult world is a mystery, a cacophony of sights and sounds. Figuratively we sense Joey’s confusion and wonderment. Though there’s still occasional artifacts from the print, contrasts are vibrant and noise is minimal (though there’s natural grain which imparts a timeless look). It feels less like a “film” and very much like B&W photographs in motion–if that makes any sense.

Audio is still two channel mono. It’s decent quality. The score (Eddy Hanson) is every bit a central character in Little Fugitive. After a screening you might not be able to get that harmonica or “Home on the Range” out of your head. But, I wonder what the experience would be like with a remastered 5.1 surround track?

I agree with those who would refer to the 80 minute piece as a time capsule. There’s little depth to the plot. Yet that’s not the point. It’s really one child’s dreamy getaway to Coney Island, and a filmmakers love letter to New York. A celebration of an innocent time that should remain an integral part of American film history.