“When you write an article, a piece of reportage, you have to stay within the limits of facts, of what really happened, [but literature] universalizes the truth.” – Oriana Fallaci (speaking with Charlie Rose)

The best theater stays with you. It makes you think, deeply. Maybe question what you’ve seen. Or possibly explore the subject matter further. There’s also no doubt, as I discovered with this world premiere of Pulitzer-Prize winning playwright Lawrence Wright’s Fallaci, it also incites you to discuss at length. Like, for example, what was it like for a female journalist, in 1979, to hold court, and interview Ayatollah Khomeini at his home?

During her “life of resistance” Fallaci (who died in 2006) conducted interviews with some of the world’s most infamous political figures including Indira Gandhi, Yasser Arafat, Golda Meir, Deng Xiaoping, and the aforementioned Khomeini with whom she managed, so it seemed according to her account, to crack a smile with some well timed potty humor. After all, the political stage, whether far east, far right, or far from right, is occupied by human beings. Flawed ones certainly, as Fallaci (played wonderfully by Concetta Tomei) reminds us. Why on earth are these flawed individuals in positions to influence so many lives?

With Fallaci at Berkeley Rep, yet again it happened. At the end an evening of theater, I pulled up Google, Wikipedia, even Amazon and set out to learn more about the the world I had just experienced.

In Wright’s staging of her life in the world premiere at Berkeley Rep, the tables are turned, and the chain-smoking Italian and feisty raconteur herself becomes the subject matter. Twenty-something Maryam (Marjan Neshat) knocks on her door, slyly convinces her to participate in a project for school, flips open a notepad; for the next ninety minutes we’re treated to an engrossing replay of some of her most fascinating first-hand accounts of sparring with icons of modern day history. Transforming “the art of interviewing into mortal combat” requires a controversial, no-holds barred approach. Islam is “a stagnant pond” that never refreshes itself. Yasser Arafat was surely a closet gay – he had the most gorgeous bodyguard Fallaci had ever seen. But when she pushes the truth to the limits, “they squeal, but they don’t sue.”

Speaking of James Bond, Fallaci’s earlier work included The Egotists (1968), proving once again that she could get anyone to open up. Featuring sixteen celebrity interviews, ranging from Alfred Hitchcock to Sammy Davis Jr., my favorite moments come when she interviews Sean Connery, who in the mid ’60s was flying as high as any celebrity. On Bond she says to Connery: “the symbol of our dreams I find him, when all’s said and done, a rather sad one: this man who always wins, without morals, or ideals, or friends, rather ignorant, too, except about explosives, cards and drinking. Forgive me, won’t you? Don’t be offended.”

To those living outside the realm of journalism, or perhaps for those too young to know any better–possibly I score on both counts–Fallaci may not be the household name that it is for so many others. My undergrad and graduate studies had me in front of spreadsheets, assessing marketing strategies, and creating ad hoc beta analysis formulas for the NYSE US 100. Occasionally I would head to the Carleton library to research a poli sci piece, but though the journalism school was only across the quad, it might’ve as well been across the river somewhere in Quebec for all I knew.

My best reference point might well be Christopher Hitchens. When he died, a surfeit of stories, chronicling his late night drinking sessions with intellectuals, celebrities, and writers, hit all the majors (New Yorker, Vanity Fair, WSJ, etc.). There was some remarkable accounts. I could only imagine would it would be like if Fallaci too was at that table, in that smokey New York brownstone, kibitzing with Hitch, Sean Penn and Christopher Buckley into the wee hours.

With Fallaci at Berkeley Rep, yet again it happened. At the end of an evening of theater, I pulled up Google, Wikipedia, even Amazon and set out to learn more about the the world I had just experienced. The best theater. It stays with you. 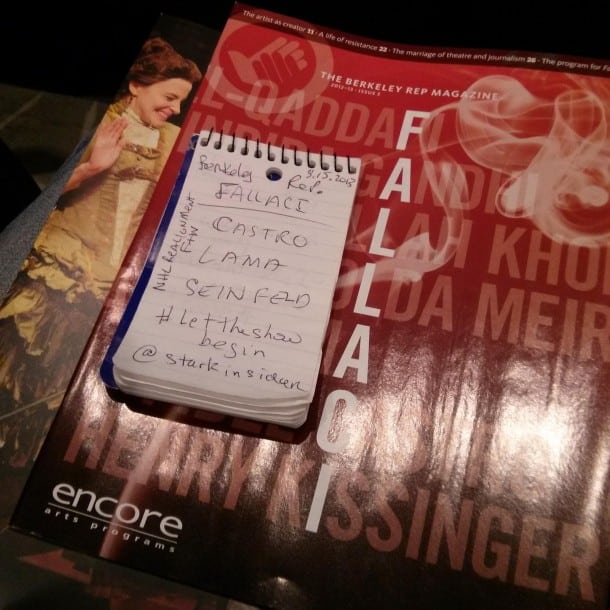