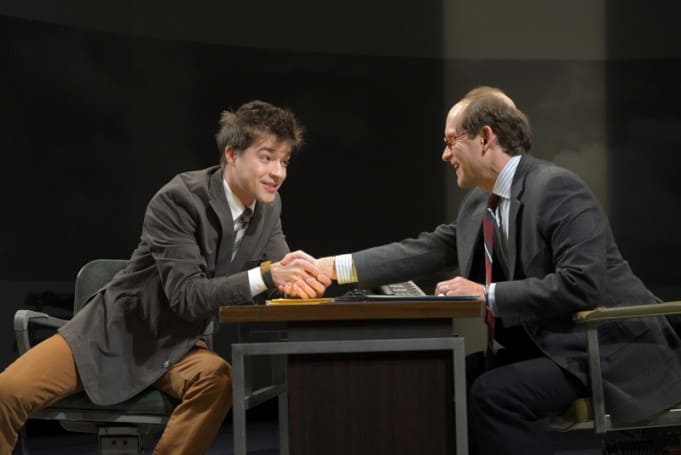 That’s A.C.T.’s resident queen of stage, René Augesen, as a power-hungry conservative, delivering one in a series of zingers in one of her best performances to ever grace the Geary stage.

In Dead Metaphor she takes a former sniper (George Hampe), who has just returned home from Afghanistan, under her wing as an assistant. Having killed over eighteen people apparently doesn’t necessarily impress employers, so he’s eager for any kind of job, even if it means fetching coffee, and stretching his ethical limits. While her idea originally seemed bright enough, a backdoor donation from The Church threatens to send her election hopes crashing down. And, so, someone must take the fall.

So hopped up on testosterone, and with her power suits and short blonde hair, the scene-stealing Augesen at times reminded me of Amy Poehler. Of course, we all know it’s really just Sarah Palin in a wig.

A lot of what transpires on stage during Dead Metaphor feels fresh. From the staging, which features a revolving platform with small visible sets at the ready for each scene, to the concept of a level-headed, coherent soldier trying to adapt to an unrecognizable world back home where his wife has divorced him and his father is suffering from a tumor, Canadian playwright George Walker’s piece is for the here and now. It’s one of the reasons why A.C.T remains one of our favorite theater houses in the Bay Area; the words “stale” and “revival” have been resolutely banned. Instead we’re treated to cutting edge theater with dialog that is contemporary, oozing dark humor.

As the job seeker with a limited skill set–killing people from a distance–George Hampe delivers a strong performance. He’s a strong believer in honor. His father reminds him that some of the Taliban he’s killed have families too. Hampe captures the confusion perfectly. He’s an independent, free-willed kid. But he’s also a miniature weapon of mass destruction, a product of our society – of the Government, and for the people. Which world is more messed up? The battlefield in the Middle East, or the one here in Middle America? Yes.

René Augesen, whom we’ve seen perform numerous times here since we began covering theater in 2009, gives a performance for the ages. It’s comical, yes. But with simmering ugliness that prevents it from becoming camp (granted, the material no doubt flirts with the theater of the absurd). She’s constantly on her BlackBerry (even during church service – “It’s an emergency!”), and has a maniacal laugh that reminds us that Satan’s little helpers do sometimes where Prada. Abortion? Same-sex marriage? Who cares?! Hang on a sec. What do the polls say? Uhh, I do care! So hopped up on testosterone, and with her power suits and short blonde hair (I’m accustomed to that long, poofy 80s look!) the scene-stealing Augesen at times reminded me of Amy Poehler. Of course, we all know it’s really just Sarah Palin in a wig.

On the downside, most, if not all, of the characters in this play are far from the most endearing of people. The women, in particular, could be construed as extreme caricatures–the doting mother supporting her aging husband, the whiny wife unhappy with her underachieving husband, and, in Augesen, the career-driven power monger stepping all over her wimpy spouse.

Regardless, there’s enough here to like. The climax ends with a sudden bang, and enough uncertainty to raise a whole bunch of questions as we head out to Geary Street.

Ideally the Sniper from the play takes out that guy in @actsanfrancisco audience fiddling with loud plastic wrapper. 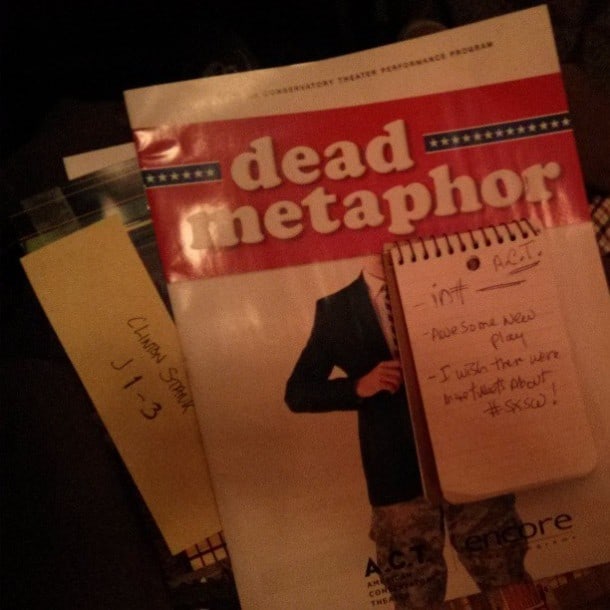