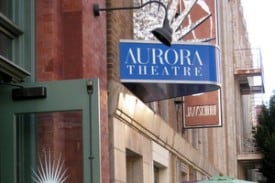 Berkeley’s Aurora Theatre Company has announced the lineup for the 2013-14 season, and here’s the details.

What happens when the person you revere isn’t exactly who you think they are? The young, brilliant Emma Joseph is a high achiever shaken to the core by disillusion. She proudly carries the torch of her family’s Marxist tradition by devoting her life to the memory of her famously blacklisted grandfather, but when a new book reveals shocking truths about the man himself, the entire family is forced to confront questions of honesty and allegiance they thought had long ago been resolved.

In the break room of a Hobby Lobby craft store in Idaho, the seemingly innocuous Will, an ex- Evangelical cult member who has fled his rural hometown after a scandal involving his fundamentalist church, applies for a job. He is on a mission – to bond with his estranged son before the impending Rapture occurs. Enlisting the aid of his new co-workers, a group of eccentric characters who are also struggling to find their own way, Will tries to reconnect with his son before the end of the world.

A parent/teacher conference begins with a concerned mother wanting answers as to why her son was suspended from his 5th grade class. Was he a bully? A victim? A protector? Their discussion develops into a dramatically charged, volatile exploration of personal responsibility, freedom of expression, the failure of our school system, bullying, and blame.

It is October 1517 and the beginning of another fall semester at the University of Wittenberg finds certain members of the faculty and student body at personal and professional crossroads. Hamlet (senior, class of 1518), suffering from a sudden crisis of faith, has just returned from summer break with a revelation that threatens the very order of the universe. As the Prince who should be King laughably ping-pongs between the contrary advice of Martin Luther (Professor, theology) and Doctor John Faustus (Professor, philosophy), two of history’s most stubborn intellectuals go head-to-head in comic combat for the conflicted Dane’s allegiance. Will Faustus, the philosopher with a lust for life, win the confused young man’s mind, or can Luther, the cleric who ignited the Protestant Reformation, win his soul?

Set during one long day, three small-time crooks of great ambition and low morals make plans to rob a man of his valuable coin collection, including what they believe to be an extremely valuable “Buffalo nickel.” As the day goes on, paranoia builds, motivations change, and loyalties shift, with characters wielding words like weapons to intimidate and manipulate each other. A little out of luck and way out of their league, when the con goes awry, it’s every man for himself.

A riveting two-person drama that lays bare a vivid slice of paranoid life under Stalin. Set in a 1930s Soviet era office, the director in a nameless government agency engages in an “interview” with one of his employees. Anna, a demur buttoned-down servant of the state, has no idea as to why she has been called into the office of her superior. She is wary and tight-lipped, as her job, the systematic practice of censorship and disinformation, has taught her to take nothing at face value. As she tries to figure out the reason for the meeting, details gradually begin to emerge and suspicions are directed towards her. The director seems to have a hidden agenda, or is it Anna who has an agenda of her own?