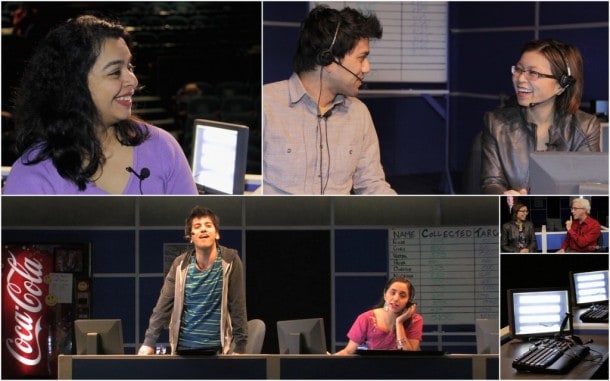 If the filmmakers ever decide to make a sequel to Boiler Room, they may want to set it in a call center in India. Over the weekend I went behind the scenes set San Jose Repertory Theatre in this latest Stark Insider TV segment (see below for video). What I discovered opened my eyes.

Disconnect, which makes its West Coast premiere here this month, tears away the scripts, the happy faces, the phony names, and reveals what really goes on when the lines go silent at a large scale call center. Well, okay, sure enough as I found out, there are still scripts, happy faces and phony names. And that guy “Ross” helping you out with your hotel booking? He’s from “Chicago,” and, coincidentally, has a lot in common with you.

As actor Imran Sheikh (Ross!) tells me, “Keep a smile on at all times no matter what’s going on. Be happy. Be positive… Just be nice. And manipulate people a little.”

Silicon Valley is the ideal place to stage Disconnect. Almost every single tech company on earth outsources part or all of its customer service operations.

“The news was brilliant. We were told call centers were transforming India. India is no longer a developing country,” said playwright Anupama Chandrasekhar who spent a year living in America before starting work on the play in 2009. “But a few years down the line, the whole sheen started to wear off.”

According to a report by the Communications Workers of America (Offshoring American Call Centers: The Threat to Consumers, Communities, and National Security), in recent years, U.S. companies exported more than 500,000 call center jobs to India, the Philippines, Egypt, Mexico, Honduras, and other developing nations. Proposed legislation would potentially require call center agents to reveal their location.

There’s many interesting, controversial and enlightening facets to the subject matter that Chandrasekhar’s play treads.

“I was looking for a play that would first of all reflect more of the South Asian community here in the South Bay. We have a huge Indo-American population,” artistic Rick Lombardo tells me in this Stark Insider TV interview. “And there weren’t a lot of plays that told their stories, or represent their cultures.”