As a person, Mark Rothko seems remote to us. Whereas other artists wow us with oversize personalities (or the opposite, in the case of Warhol), Rothko’s art transcends the artist. While his canvases remain central, as a figure he becomes smaller with time. Researching the subject hides as much as it reveals. One of the few illuminating exceptions is the recording “Rothko on Rothko,” a conversation with Rothko’s son Christopher.

The play Red, which just opened at the San Jose Stage, remedies this problem. Written by John Logan, author of Sweeney Todd, Red received six Tonys in 2010. Entranced by the Rothko canvases at the Tate, which were originally commissioned for the Four Seasons restaurant in NYC, Logan set about recreating his vision of Rothko in his studio during 1958 and 1959. This two-man show consists of Rothko, played by Randall King, and his young assistant Ken, played by Aaron Wilson.

More than anything, Red is a play about ideas.

This production reveals a frighteningly self-indulgent Rothko, bilious with rage and perpetually in the bottle. Ken is as much the object of his venom as are gallery owners and art collectors, and the larger world in general. I don’t know if this portrayal bears any relationship to the real Rothko, but it does give life to the dry biographical information about Rothko’s multiple marriages and 1970 suicide.

My only point of familiarity with Randall King was his direction of Every Christmas Story Ever Told, which was a sheer delight. If the photos of Rothko that litter the web are any indication, King completely nails Rothko’s physical persona. His intense performance is so unrelenting that one wonders what it does to one’s spirit to be Mark Rothko, night after night. 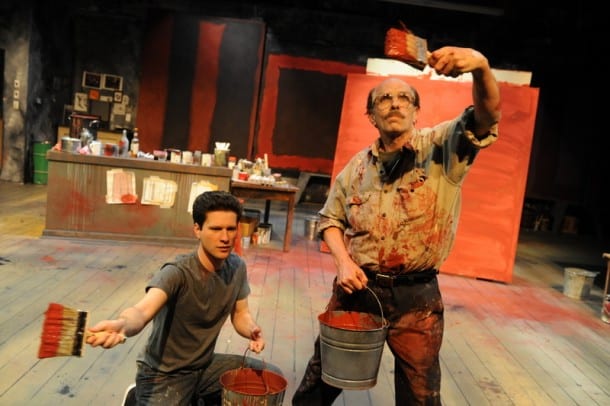 In between the self-indulgent rants, Logan provides one quotable line after another. For example, raging over the decline of modern sensibilities, Rothko sneers at those who fail to ask “where is the arbitration between what I like and what I respect?”

Equally gripping is how Rothko saw himself in relation to Pollack and how he imagined his position slipping, as abstract expressionism yielded to pop art and minimalism. While his rants about Warhol’s soup cans and Lichtenstein’s Marvel Comic book characters are misplaced (like Warhol’s Campbell’s soup canvases, which date to 1962, Lichtenstein’s Marvel Comic book characters are an early 1960’s invention, both done after the Seagram’s murals) focusing on these details would be to miss the point all together. More than anything, Red is a play about ideas.

Rothko’s perpetual bombast means that Red is not easy on one’s nerves. His rage is modulated only by the occasional play of shadows across the floor and moments in which Rothko looks quizzically at his canvas.

Reds will be at the San Jose Stage until March 3. It is well worth taking in if you have even a passing interest in contemporary American art.