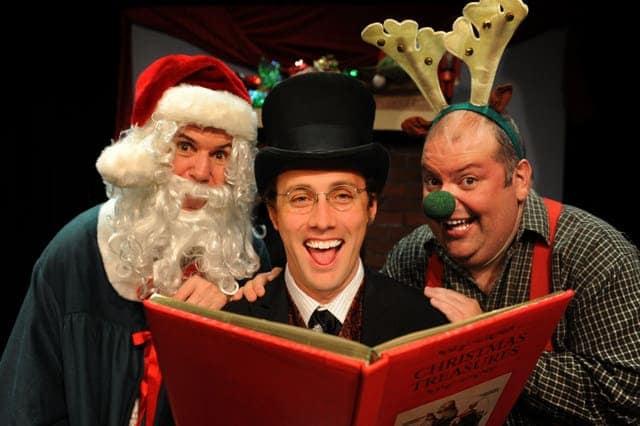 Every Christmas Story Ever Told claims to be “a fond and furious look at the holiday classics and tradition we all remember. From Frosty to Rudolph, from the Grinch to It’s a Wonderful Life, no pop culture holiday icon is spared in this worldwide of holiday merriment.” Anticipating a sweep from holiday standard to ironic self-knowledge, I winced at the press release and idly wondered what we’d do when our attentions spans were too short for universally recognized holiday standards to develop.

Sometimes I should just get over myself.

Every Christmas Story Ever Told turned out to be the funniest thing I’ve seen on a Bay Area stage in a very long time. With everything from reingoats to Anthony Weiner’s pull toy, and buzzing Norelco razors speeding dementedly across the tiny thrust stage, Kevin Blackton, Martin Rohas Dietrich and Will Springhorn, Jr. delivered a fast-paced script that had the audience in the aisles wiping their eyes as they listened a passel of amphetamine-crazed munchkins screeching in unison:

Sometimes the only logical response as an audience member is to give yourself up to it all, including the fruit nut and dating game and giving the Donner beast a pass. Every Christmas Story Every Told was just such an occasion.

As stated at the outset of the production, the first act riffed off those holiday standards that you once waited an entire year to see. As inconceivable as it is to those born after VCRs, DVDs, Netflix, and iTunes, these standards are deeply etched into our cultural memory because we (gasp!) paid attention to them. Sod any discussion as to the merit of these things: the fact that this happened via the collective cultural trough with its measly ten channels just upped the value of the experience. In revisiting these, Every Christmas Story Ever Told becomes a homage to Christmas kitsch.

The second act was a tangled mishmosh of It’s a Wonderful Life crossed with a Christmas Carol. This made perfect sense because both deal with past and future lives.  Will Springhorn Jr. had the voice of George Bailey positively nailed, and if this George Bailey ended up at the Crachit’s Christmas, trust me, it made a world of sense.

Every Christmas Story Ever Told put the San Jose Stage Company on my list to follow.  Moreover, just like the televisions bits it riffs on, I’ve got to find this show again next year.