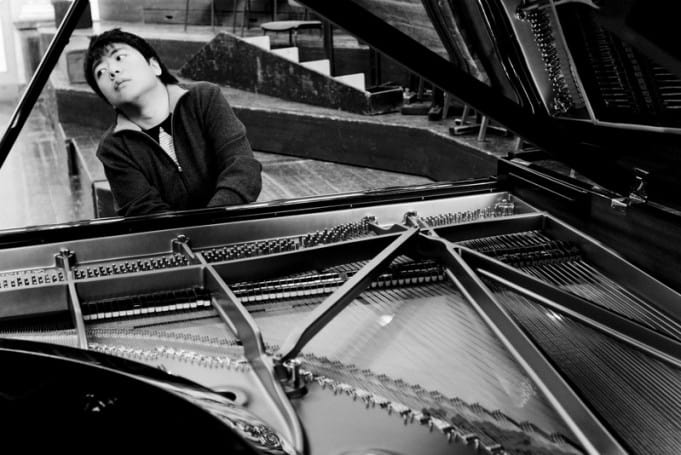 Who could imagine a program of Cowell’s “Music 1957,” Prokofiev’s “Concerto No. 3,” with Lang Lang on piano, and Rachmaninoff’s Symphony No. 2? One could die of a surfeit of such music. However, the San Francisco Symphony ups the ante and brings Scott Fogelsong to the podium for a pre-concert talk, as well. Fogelsong (along with John Prescott) is why I bother with pre-concert talks.

Fogelsong and Prescott excluded, pre-concert talks are often lame affairs, providing no more than you’d get from a quick perusal of Wikipedia. Only slightly better are the fair-to-middling speakers discoursing about sonata form. Fogelsong leaves these guys in the dust. A natural-born teacher, he speaks intelligently to the complete newcomer, and teases the more knowing with gems from his vault, and makes connections that aren’t entirely obvious.

Tonight, Fogelsong was in top form. Avoiding what could have been a dreary lecture about influences on Rachmaninoff, he opted to present demonstrative snippets. After showing how the very young Rachmaninoff’s orchestral music sounded like “Mendelssohn after a couple of vodkas,” he played bits of Rachmaninoff’s first concerto to show influence of Tchaikovsky. Fogelsong continued this demonstration with snippets of a tone poem titled “The Rock” in which the maturing Rachmaninoff began to sound like Rimsky Korsakov, as well as the “Caprice Boheme” (1892) and the Symphony No. 1 (1897). The second symphony, which was tonight’s piece, premiered in 1908. While this piece (or at least the Adagio thereof) might be one of the most over-played pieces of classical music, its lush romanticism never seems to stale.  Fogelsong put an interesting approach to this piece, taking time to play other pieces that premiered that year, including “Take Me Out to the Ballgame” and Elgar’s Symphony No. 1.

The performance itself opened with Cowell’s “Music 1957,”which was reminiscent of the Cowell quartet performed by the Ives Quartet just a week ago. The percussive nature of that quartet was magnified in colorful “Music 1957.” The themes of this short (roughly ten minutes) piece subtly morphed their way from section to section in highly engaging ways. I’m a complete sucker for colorful compositions, and Cowell comes to the top of the pile for sheer enjoy-ability.

The Cowell piece was just a warm-up for what followed.  Any pianist  – and any critic who thinks seriously about classical music – has to wrap his or her mind around the phenom that is Lang Lang.  Is this guy the Elvis of classical music, as some insist?  Even his critics, like Christopher Douglas of the New Yorker (who calls him Bang Bang) sing his praises, saying “If Jerry Lee Lewis were a classical pianist, he’d be Lang Lang.” He seems to have performed at every major event of the millennium.  Not since Horowitz and Rubenstein have pianists gotten so much popular coverage.

[ALSO: San Francisco Symphony: Channelling Bach, Schiff brings out the best of us]

Symphony audiences don’t give it up easily. Gratuitous standing ovations just don’t happen at Davies Symphony Hall. When people stand, it usually means they are leaving.  However, this audience wasn’t about to leave – and wasn’t about to let Lang Lang leave the stage either. He returned for a quick encore of Chopin’s “Waltz in D♭ major” (aka the Minute Waltz). I’ve done a hacker’s job with this piece for 35 odd years – playing it well enough to keep myself moderately entertained, but not to trot it out for company. For Lang Lang, it was a complete throw-away, to be hammed to the max. The appreciative audience roared. He could have played “Three Blind Mice” and I suspect the response would have been the same.

Comparisons with Schiff’s performance last week are inevitable – and perhaps unfair to both. Not only was music they performed was very different (Bach and Prokofiev), their personal styles are very different. Schiff plays from the inside out with sweet lucidity and warmth that would be inappropriate for the Prokofiev. Lang Lang plays from the outside in with a ferocity that is rightly his. Ranking performers (a tradition that Lang Lang speaks of in his autobiography “Journey of a Thousand Miles”) seems ridiculous and unnecessarily limiting.

Following intermission, was the Rachmaninoff Symphony No. 2. As noted above, this piece remains intensely popular, picked up by jazz and pop performers alike. Despite the broad appeal, there is always more to hear in this piece, especially when its not truncated. The texture of some sections is so thick that new things always seem to come out in live performances. Performed with MTT on the podium, the symphony brought out the deep, lush romanticism of every gesture, making an unforgettable performance.