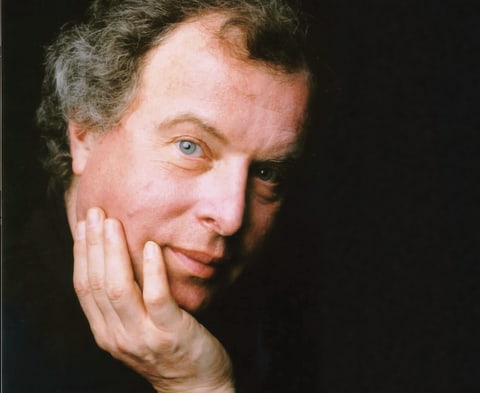 While something extraordinary is always happening at the San Francisco Symphony, 2012-2013 is all the more so with András Schiff’s repeated appearances. Beloved by classical aficionados – and even more by pianists – Schiff appears both on podium and behind the piano. Last night’s concert featured both Schiff-the-pianist and Schiff-the-conductor, which made for a truly magic evening.

As a pianist, András Schiff invariably awakens your ears to things they have never heard before. His subtle expressivity makes common Bach preludes known by almost every elementary piano student seem like a whole new experience. Because of this, I was particularly curious how he would be as a conductor.

The evening’s performance opened with Fingal’s Cave (1834) by Mendelssohn. Like the other Mendelssohn piece that book-ended the concert, it was inspired in part, by Mendelssohn’s travels. The real Fingal’s Cave lies in the outer Hebrides, an impressive beach cave composed of volcanic basalt pillars.

Under Schiff’s non-existent baton, the SF Symphony delivered a nuanced expression of every phrase which brought out the essence of this heroically mystical piece. The color of this performance, particularly of the reeds and bassoons as they repeat the several musical ideas that make up this eight-minute gem, made my own recording (Leonard Bernstein with the Israel Philharmonic) seem curiously overwrought in comparison.

J.S. Bach’s Keyboard Concert No. 2 in E Major followed. Alexandra Amati-Camperi explained earlier in the evening that this piece may have originally been a violin concerto, given the insistent repetition of a second note, as if it were a drone on a violin. Origins aside, in a  day in which virtuoso pianists seems ever more common, almost every concert pianist can perform the two Allegros of this piece with lightning-like speed, only Schiff does it with such clarity and ease of ornamentation. The lack of excessive emotionality made the delivery all the more effective. I haven’t been this blown away by a single musician since Lars Mortensen played with Philharmonia Baroque several years back.

Concerto No. 2 in E Major was immediately followed by Keyboard Concert No. 1 in D Minor. The two main foci of all three movements of this piece were: (1) Schiff the soloist; and (2) Schiff and the symphony playing together. While two centers (soloist and orchestra) are the very definition of a concerto, last night the focus was on how gently Schiff the soloist seemed to make room for the orchestra to join him. The entire audience was on board and hanging on every note of the first movement. The overall effect was so stunning that the audience broke out in applause. This response reminded me of how relatively recent the restriction on not applauding after individual movements is – and how instead of elevating the performance, this custom seems to deaden a live performance into a museum piece. The elderly gentleman behind me expressed how stricken the audience felt when the piece ended, as he whispered “bye-bye piano.”

Schiff returned to the podium after intermission for a performance of Mendelssohn’s Symphony No. 4 in Major. Better known as the Italian, this piece seems to be a favorite of the SF Symphony, as they just performed it in 2011, under the baton of Kurt Masur. While this previous performance was quite stunning, tonight’s performance was decidedly different.

The violins in the first allegro vivace movement sounded the first theme of this Symphony lightly, almost burbling in rapture, as it does throughout the exposition. This airiness was unlike the hearty-good-times-in-the-south version so commonly heard. The second theme, as first sounded by the woodwinds, had a similar lightness. The delicacy provided a perfect contrast for what followed throughout this movement, as Mendelssohn puts these two simple riffs through their paces, including even a martial version.

The second andante con moto movement was remarkable for what it wasn’t. Unlike the 2010 performance, which had the somber feel of a religious processional, Schiff’s version seemed faster, lighter.  If possible, the SF Symphony seemed to bring even more unity than they usually do to a performance as they finessed trills with perfect clarity.

The precision and clear articulation continued throughout the rapid-fire Salterello, the performance of which was amazing for the clear enunciation of every single note.  Having listened to this pieces dozens of times over the years, I came away thinking that I had finally really heard it.

The good news is that Schiff will be performing several times throughout the year, so if you missed this opportunity, there will be more to follow, including a performance of The Well-Tempered Clavier, Book 2 on October 21st. Hopefully, SFS will continue with more videos by this master, such as the gem presently on their web site that I will talk about later.