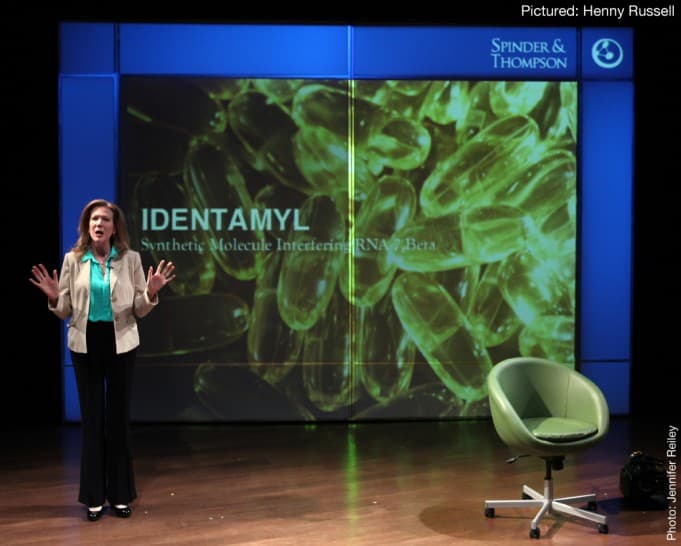 Definitely: Sharr White continues to impress. Last season the playwright brought us the unique Annapurna, and now he delivers an equally compelling work in The Other Place, an intense one act play that opened last week at the Magic Theatre in San Francisco. Once again Sharr dances with the artifice of memory and regret. The result is 80 minutes of poignant theatre that flat out refuses to let us out of its grip. And that final scene! It would seem trite or cliché even if I tried to describe it here, but that emotional wallop is an exclamation mark on an engrossing and emotional night out at the theater.

Meet Juliana (Henny Russell, in an outstanding performance), a 52 year-old scientist in the throws of a separation, either on the verge of a major breakthrough for her patented protein therapy, or about to succumb to the trauma of horrors past. The play opens with her giving a PowerPoint presentation on the new drug at a conference in a resort in beautiful St. Thomas. A young woman, oddly dressed only in a yellow string bikini amongst a sea of men, continually challenges her focus during the pitch. Here Sharr employs a most interesting style of story-telling by interjecting cut-scenes between the opening monologue — a structure that would appear immediately familiar in a movie. Actors walk onto the small thrust stage at Magic, establishing meetings in a hospital, arguments in a home, before the lights once again brighten and Russell continues with her distracted presentation (replete with projector and detailed scientific visuals of genes). It works exceptionally well. We learn that her husband (Donald Sage Mackay) is a successful oncologist. And yet despite their apparent success, their daughter (Carrie Paff) is inexplicably estranged.

Entertaining enough, but by the half-way mark I was somewhat nonplussed. This is too domestic I thought. There’s no shortage of conversation that degenerates quickly into yelling matches. Divorce proceedings limp along, and we’re unwitting witnesses to the anger that hangs in the air constantly.

Now, there is a twist. Or maybe it’s not a twist. I’m not sure – it depends on your perception. Soon enough, all becomes clear(er).

This is the beauty of this play; what appears ordinary on the surface is anything but, and we find ourselves asking questions, contemplating the various actions the characters are taking which all appear right, yet seem to further deepen the pain, negative consequences.

I thought the lighting (Eric Southern) and sound (Brandon Wolcott), though subtle, were exemplary. There’s a lot of cues and marks in this play, and the execution appeared near flawless (there were a few minor issues with the PowerPoint slides, but isn’t that just the way it always is in real life anyways?). The stage is bathed in hospital-like whites, with glowing backdrop, before transforming into a stranger’s home in Cape Cod. What are we doing here?

A woman in-between the sky and the earth…

Can you solve the mystery? #lettheshowbegin RT @starkinsider: Review: A beautiful mind in ‘The Other Place’ https://www.starkinsider.com/2012/09/magic-theatre-the-other-place-review-san-francisco-theater.html 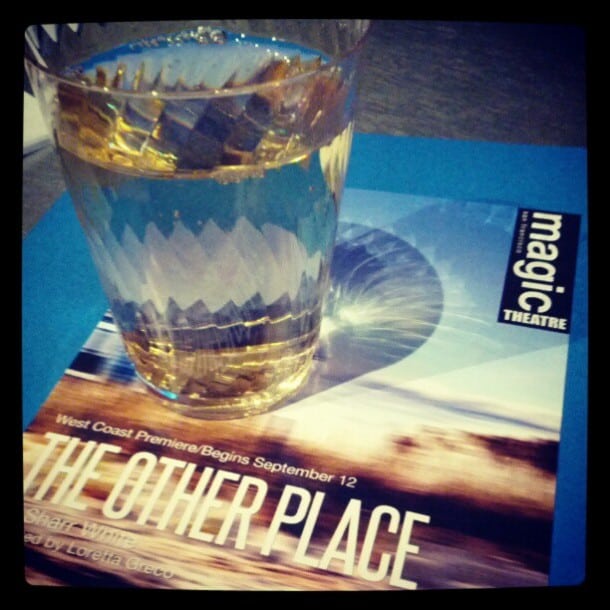