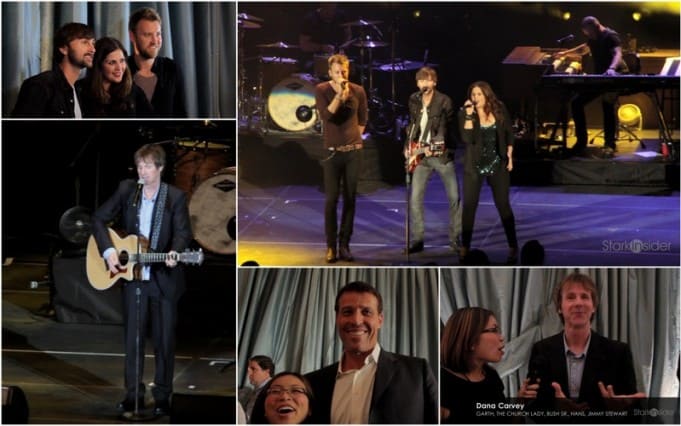 Last night, downtown San Francisco was once again a real hot spot. Grammy award-winning trio Lady Antebellum and comedian Dana Carvey proved that raising money for a good cause can be a free-wheeling, entertaining time. To say their performances left the crowd energized would be an understatement.

The concert, which benefited the UCSF Benioff Children’s Hospital, drew thousands to the Bill Graham Civic Auditorium. Later, will.i.am of the Black Eyed Peas and MC Hammer spun tunes at the after party held in City Hall, which was bathed in chic shades of blue.

Yes, of course, I needed to get the scoop. So I headed on location to see what we’d discover behind the scenes. 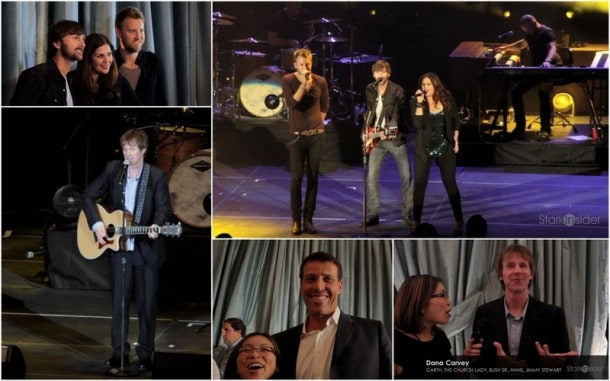 Now that all three members — Hillary Scott, Charles Kelley, Dave Haywood — of headliners Lady Antebellum are happily married, will their angst-driven creative juices dry up… after all who can’t find their inner most lyrical demons in the midst of a torrential breakup? Hillary explained with a laugh, “I just thought that dating would provide content for our music. And it kind of did.” Also, is it really true that Tiger Woods golf is the real reason to buy an iPhone? Guitarist Dave Haywood reveals all.

Still riding high on the success of “Need You Now”, the trio has been on a roll in 2012. Earlier in the year they won a Grammy for best country album (“Own the Night”), and followed that up with a supporting tour featuring Darius Rucker and Thompson Square. By the way, am I the only one that can’t get their lyrics out of my head – “It’s a quarter after one, I’m all alone and I need you now.” 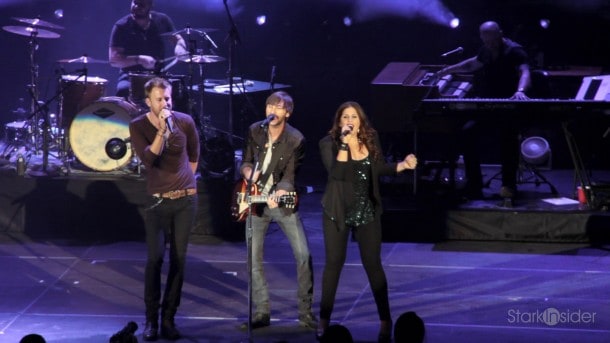 I wondered: could Dana Carvey do a Mitt Romney impression? Turns out, yes he can. Well sort of, watch this special episode of Stark Insider TV as I venture backstage into the green room at the concert to learn more about the new hospital (scheduled to open in 2015) and those that are donating so generously to raise the $1B+ needed to make it happen. Note that I was thrilled to learn that Lady Antebellum generously donated their $50,000 appearance fee to the foundation. Earlier, as was widely reported, Marc and Lynne Benioff donated $100 million.

Stark Insider TV: The Pearl Fishers (aka Loni’s audition as a Virgin Priestess)

When complete the UCSF Benioff Children’s Hospital (say it fast several times) will be one of the nation’s best children’s medical facilities. Located at UCSF’s Mission Bay campus near downtown San Francisco, the new UCSF Benioff Children’s Hospital at Mission Bay will be part of a 289-bed integrated hospital complex for children, women and cancer patients. I’m told that upon opening on February 1, 2015, the 183-bed children’s hospital will set a new world-class standard for patient- and family-centered health care, safety, sustainability and translational medicine.

PS – You tell me: did my partner in crime, Clint, go Sean Penn on me in the “Hail a Cab!” outtake at the end?!