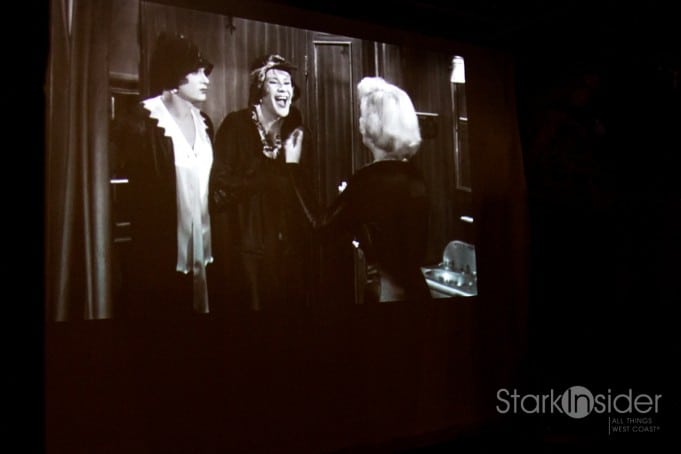 Here’s a peak inside the newly restored historic champagne cellars at Buena Vista Winery in Sonoma. As you’ll find out, little did I know I’d find myself in a dispute over a swing on this special day (sigh – see video below for more on that kerfuffle).

That aside, we were given a preview at an entertaining media reception last week hosted by none other than wine magnate and personality extraordinaire Jean-Charles Boisset. The event coincided with the 200th birthday party of the “Count of Buena Vista.” Yes, this marks the first time I’ve celebrated such an occasion.

As you can see in these photos, the new cellars look spectacular. I especially like the way the wine caves — three of them at the rear — are integrated into the building. Also, black and white films were projected high onto the walls which gave the place a vintage cultural vibe.

Artist Stanislas Kostka was working on one of his oil paintings in the courtyard which added to the surreal, and creative mood on this day. His works are strikingly unique, whimsical. He told me it was all part of Jean-Charles’ vision of combining art, wine, into a cultural exhibition and celebration. Also, he was quick to point out (a few times!) that one of his most recognizable clients was the Queen of England.

No fine wine for you, you damn populist pig!

Later, in honor of the Count’s Hungarian roots — he set sail to America in 1840 and established Buena Vista in 1857 — a Sonoma-Tokaj sister agreement was signed. The Count who was born into nobility and whose real name is Agoston Haraszthy de Mokesa, was an early pioneer of the California wine industry. His first attempt at planting vineyards failed miserably when he purchased 110 acres just south of San Francisco. The problem? Too foggy (really?!). After he moved north, and discovered the ideal climate of Sonoma, the rest, as they say, is history.

Here’s a preview of a Stark Insider TV segment that will be posted soon.