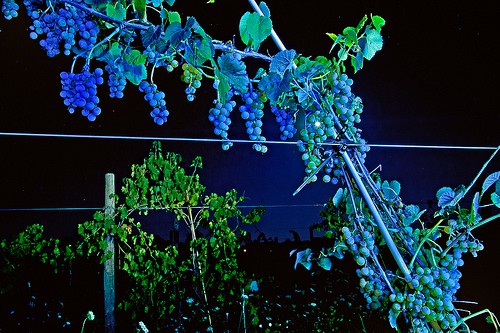 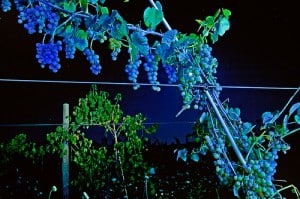 Stealing grapes. An article in yesterday’s Merc, our beloved Silicon Valley newsletter, caught my eye. It was filled with images right out of a Hollywood blockbuster – then again I’m not so sure a wine thriller is about to take down The Dark Knight himself anytime soon.

There’s flashlights bobbing in the dark.

In the end, according to vineyard owner Stan Planchon, 81 plants had been stripped of their grapes. He estimates he lost roughly $1,500 worth of old-vine grapes; ones, he notes, that had even been featured in Spectator (always the WS mention eh).

All this went down in the middle of the night, and by the time the police had arrived the perps had fled. No one is in custody.

But this bit of news got me to thinking:

(1) Why don’t we hear about this more often?

I’m glad we don’t. I’m just surprised that given the expanse of vineyards, and the difficulty of securing extended property borders (US-Mexico comes to mind for some reason) that more wineries aren’t getting ripped off. Maybe they are, and we don’t hear about it often. I think of the difficulty I have of keeping my own paranoia in check when it comes to securing just our ticky-tacky home here in Silicon Valley. Sometimes I feel like Al Pacino in Scarface when he’s buying that Porsche 928… “and a radio with scanners, to pick out flying saucer, stuff like that.”

You have to wonder if these two-bit dudes had thought this one through. If they’re trying to raise cash, wouldn’t it be easier to just go to the airport lost-and-found and pick-up a stray iPad from the uninterested clerk (as happened to me because, yes, Delta will tell you they have your tablet, but, no, they won’t validate ID when “You” go to retrieve it).

Do these guys use them for their own home made juice? Or do they just eat them, while laughing uncontrollably, running up and down highway 29, waving their bongs like some sort of Twilight-Zone-meets-Sideways mashup?

On the sales side, there’s this bit of news in BusinessWeek. On Monday “a case of 1982 Chateau Lafite helped Christie’s International raise $819,715 in its first exclusively online wine auction.”