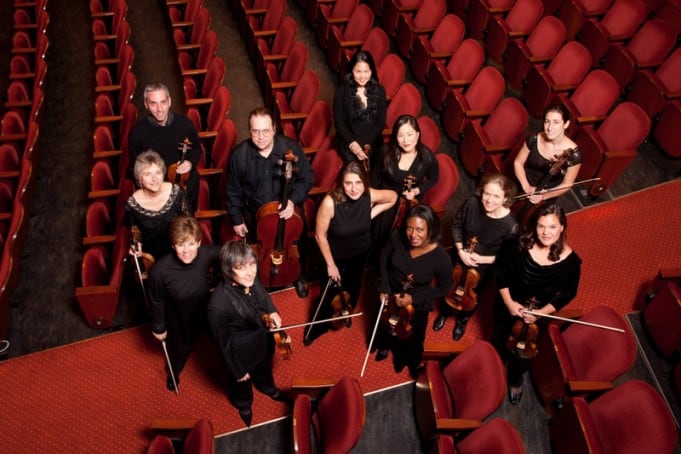 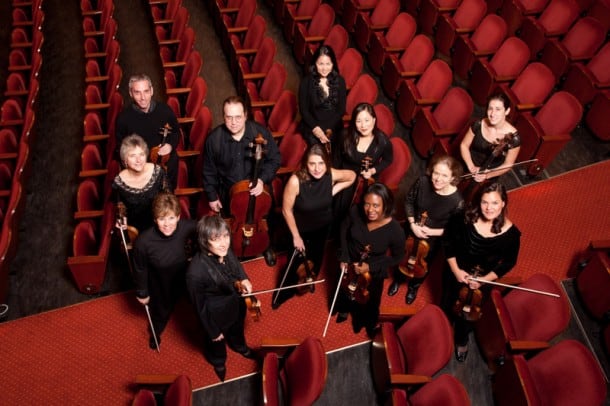 If Nadja Salerno-Sonnenberg’s nerves were stressed by the snafus faced at the season opener for the New Century Chamber Orchestra’s 2012-2013 season, the audience was none the wiser. Faced with a double-booked concert hall in which Abraham Verghese and New Century were simultaneously scheduled, the gods of theatre tech worked magic to get New Century on stage only a half hour late. Problems didn’t end there. Salerno-Sonnenberg’s nerves of steel were on display again, saying “from the top again, kids,” when a broken string marred the opening of the Benjamin Britten’s Les Illuminations. All was taken in stride, however, during this very special concert that marks the centennial of the birth of Benjamin Britten.

Operas and orchestras around the world have been raiding the Britten treasure trove to mark this centennial year. Britten (1913 – 1976) is one of those giants whose mark on modern music is inescapable. Even if you’re not a concert-goer, the odds are good that his Young Person’s Guide to the Orchestra was drummed into you by a zealous grade school music teacher (which presumes you’re an age when such people existed, but that’s a different matter).

New Century celebrated the occasion by presenting Britten’s Simple Symphony (1934) and Les Illuminations (1939), with Bartók’s Divertimento (1939) sandwiched between the two. Programmatically, these were interesting choices; not until the three were performed together did I realize the pizzicato in all three made for an curious unity.  Moreover, while the Divertimento is played fairly frequently (the San Francisco Symphony Youth Orchestra presented it just last year), the two Britten pieces aren’t exactly routine offerings. Taken together, these two pieces emphasized two sides of Britten’s work:  his youthful music and his vocal music.

Prior to last night, I was unfamiliar with Simple Symphony – and was immediately taken in by it. While movement names (“Boisterous Bourée,” “Playful Pizzicato,” “Sentimental Sarabande,” and “Frolicsome Finale” are annoyingly toy, the music is surpringly sophisticated in comparison. The first movement, “Boisterous Bourée” took me straight back to my high school music comp class because it embodies so much of what many of us were aiming for – clean melody line, simple harmonies, emphatic scalar passages with a unity of form and intensity – and missing by the proverbial country mile. The second movement, titled “Playful Pizzicato,” could serve as an imaginative exercise in technique, as the entirely orchestra variously plucks, taps, and strums their instruments. 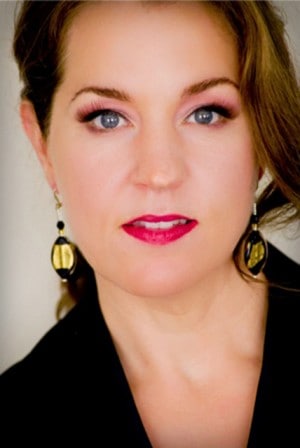 I confess, I came to this concert more interested in the Bartók than the Britten, as the Divertimento is always a go-to piece for me. Moreover, New Century always does Bartók well, as evidenced by the Romanian Folk Dances found on their “Together” CD.  Their handling of the Divertimento was exquisite, with Salerno-Sonnenberg in top form.  The intense forward moment of the first theme of the first movement was coupled with Salerno-Sonnenberg’s violin laying down a smooth, deliciously fluid melody line. The second theme sounded like a distant radio signal tuning in and out, before resolving back to the first theme. The real treat however, was in their handling of the second movement, which opened with a long impressionist, otherworldly tremelo that no one does better than Bartok. New Century took this much slower than the version I own, which allowed the listener to drift into the music and engage effortlessly.  In his notes, Peter Laki observed that the third movement is some of the most cheerful in all of Bartók. This observation is true enough as it recalls images of Bartók the ethnomusicologist hiking through the countryside of middle Europe looking for folk tunes.

Guest artists have always been a huge part of New Century’s offerings, and this season opener with Melody Moore was no exception. Moore sang the eight movements of Les Illuminations, a series of poems by Rimbaud. Dark and creepy impressionist images sound even better in the French, and this work, which centers on the line “J’ai seul la clef de cette parade sauvage” (I alone have the key to this savage parade), is no exception. This material is the opposite of the Simple Symphony – and it’s hard to imagine a better treatment than that rendered by Melody Moore. Her clean phrasing and open face stood in such contraposition to the material, that it seemed even creepier.