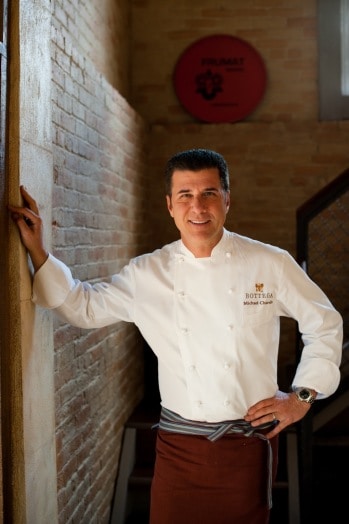 For the sport of it, we resurrected an old classic: the always interesting What’s on your iPod? game. Of course, this favorite pastime should really be renamed: What’s on your iPhone, Android smartphone and/or tablet? Doesn’t quite have the same ring to it though does it?

This week we get the personal lowdown from one of the country’s most recognizable chefs.

Not only has Michael Chiarello appeared on television several times (including Food Network’s Easy Entertaining and the upcoming season of The Next Iron Chef), he has proven to be a successful entrepreneur and restaurateur. After successfully launching  the NapaStyle line of retail stores, the avid cyclist opened his flagship restaurant, Bottega, in Napa. He’s received uniform praise and it has quickly become a must-visit for many a foodie.

Ryan Secreast, David Beckham and film stars such as Julia Roberts (and others during the Napa Valley Film Festival) have been spotted dining at Bottega.

Here’s an light-hearted Q&A if you’re interested in learning more about the Chef with the Andy Garcia slick, and penchant for Stella (while cooking of course).

We were fortunate enough to receive his playlist by email today. Here’s some of his favorite tracks.

Our verdict: not too bad! Definitely eclectic.

We would’ve liked some Green Day thrown into the mix. Or maybe some Flo Rida or the incredibly talented Janelle Monáe. Welcome omissions: Ricky Martin, Duran Duran and Rick Astley. Turns out, Chef has good taste!

Oh, one more interesting tid bit. If Chef could have dinner with any musician, living or dead, it would be…

Also, here’s a video of my second encounter and chat with Chef Michael Chiarello (and one of his sisters) at the Star Chefs and Vintners Gala in San Francisco. Watch as we talk food, wine, and “reminisce” about our previous meeting (at Pebble Beach Food & Wine). Find out if his sister has any dirt on him! Chiarello appearance at 1:40.