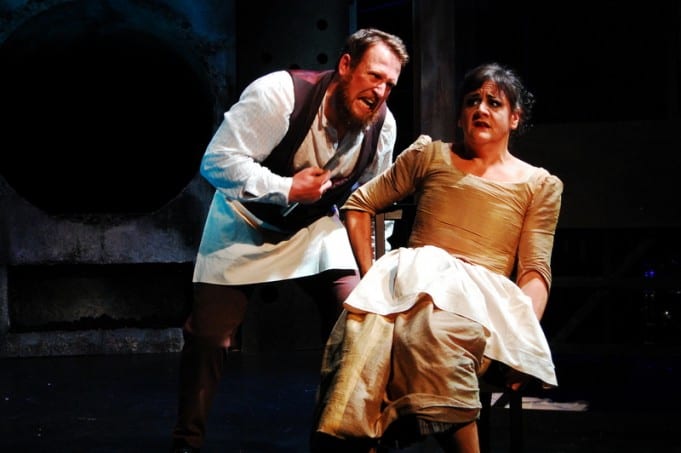 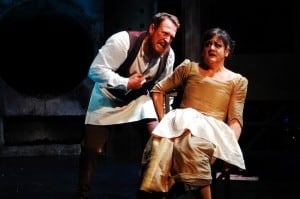 Sweeney Todd is a funny, funny play. Even people who loathe musicals are often quick to make exception for this Sondheim work. If you’ve never seen it before, I urge you to take it in. However, the production proffered by Ray of Light Theatre  at the Eureka Theatre, unfortunately, is not the place to start.

Many things go into making a good production, not the least of which are casting, acting, lighting design, sound design, script, set design and others. This production seemed to have all of these. However, creating a good production also demands a venue with sufficiently good acoustics that the audience can appreciate the enormously hard work of cast and crew.

People in the audience should never have to spend an entire show wondering what about a venue’s  acoustics makes sound disappear. Sweeney Todd relies on quick, witty lyrics that need to be heard to be appreciated. Despite my excellent seats in the center of the seventh row, the sound loss was so extreme that about half the lyrics were incomprehensible. Things were somewhat better when the actors stood on the edges of the apron of the stage – and curiously, when they were singing from a somewhat crouched position.

During intermission, the audience fell into two camps – those who insisted that the sound issues were due to the musicians playing too loudly, and those who opined that acoustics were to blame.  These aren’t mutually exclusive, of course, but I rather suspect that it was the latter. Sound quality improved when the four people in sitting in front of me left after intermission. Given that the ramped seating was at less of an angle than in other equally-sized venues, perhaps the actors’ voices hit the wall of bodies in the first rows, and never made it further back. The bottom line however, is that you never want to be having these conversations during intermission.

What made this particularly unfortunate was this appeared to be an otherwise excellent production. Physically, Adam Scott Campbell makes a masterful Sweeney Todd.  His nuanced delivery, delicious phrasing, and sensitive lingering at the ends of particular phrases made it obvious that the audience was in the hands of  master. However, this was obvious only when he sang from the apron. J. Conrad Frank was a pompously uproarious beadle with a spot-on sense of the physicality of the role.  However, so much of the sound was lost, that the venue just didn’t do them – or any other cast member –  justice. Given that the theatre was hot and stuffy to boot, it was a long, uncomfortable evening.

Sweeney Todd will be running at the Eureka until August 11. Hopefully, the sound issues can be remedied because from what little I was able to hear, this production has much to offer.