JAX ROX. Or does he?

Despite scantily clad groupies, hipster 17th century garb, and a charismatic lead in Jonathan Rhys Williams, San Jose Stage’s high energy, catchy production of Bloody Bloody Andrew Jackson doesn’t necessarily sugarcoat the life and times of America’s seventh President. His aggressive stance on native Americans, and lifelong effort to relocate tribes westward, result in plenty of cringeworthy slurs and assuredly politically incorrect dialog (see: Mad Men), and lyrics. But, that’s exactly what makes this new rock musical so darn entertaining (it premiered in Los Angeles in 2008, headed to Broadway for a short run, before receiving its regional premiere here). Whether or not Andrew Jackson — whose legacy is debated to this day by historians — was the greatest President of his time, or a genocidal murderer of Hitler proportions is not for me to say. I do know this: Bloody Bloody Andrew Jackson is a wickedly entertaining show.

American Idiot (especially) and, before that, Rock of Ages and Spring Awakening, re-booted the modern musical as we know it. A new generation of artist has given the format edge. There’s no fear in exploring the darkness; happy endings, rainbows, and yellow-bricked roads do not entirely connect with a younger audience groomed by Grand Theft Auto, Twilight. If yesterday’s material seemed utopian and fantastical, today’s is dystopian and realistic. Oh, and there be blood. Lots of it. Turns out, land expansion doesn’t come without an arrow in the back, or lustful bloodletting… you know, just for sport.

At its core, this is a show bolstered by strong musical numbers — 13 in all. The opening ensemble song “Populism, Yea, Yea!” sets the tone: it’s going to get heavy, but this history lesson is awash in satire. “We’ll take the land back from the indians / We’ll take the land back from the French and Spanish /And other people in other European countries / And other countries too / And also other places /
I’m pretty sure it’s our land anyway.” Backed by a terrific 4-piece band (Ryan Stohs, Tony Frye, Mason Kimont, Devon Minson), the performers begin their march to overthrow Washington elites in a small rustic bar with antler chandeliers in Tennessee. Here, you’d be just as likely to find Andrew Jackson lambasting out-of-touch Republican ideals to anyone who would listen, as you would to witness him winning another beer chugging contest.

Jackon’s swagger and hands-on orientation attracts fans, both political and ambivalent. On his journey to build the Democratic party, he gets married, negotiates with various Indian nations, and surrounds himself with informed associates who will soon enough find themselves advising none other than Mr. President. Before that there is the bloodshed of the War of 1812 — Creek War, The Battle of Horseshoe Bend, The Battle of New Orleans, among others — smartly encapsulated in a well-integrated, entertaining MTV-style mash-up of video projection, live action, and song.

Hey, those were lines from TLC’s “Waterfalls”! Yep, this is not your usual history lesson

By the time Jackson takes command of the White House, his testosterone-fueled bravado comes under fire, and soon enough he finds himself having to make unpopular choices. Never mind! His is the “voice of the people”! And he knows what the people wants! AJ then becomes somewhat of a party pooper in the eyes of his followers, and it’s here that the show itself loses a bit of its momentum–perhaps one too many f-words used to show us that hey, yeah, this is one bad mofo Rock Star prez. Fortunately the show has so much going for it that the minor hiccup in the script is inconsequential.

San Jose Stage has a winner on its hands. Good thing, too, that this show, at 8 weeks, has a longer run than normal. Writer-director Alex Timbers said in an interview that he’s really interested in “putting theater in dialogue with popular culture, by using those same styles and reference points [such as you’d find in a Ben Stiller or Will Ferrell movie] and hopefully allowing young people, and those generally disenfranchised with theater, to feel that theater actually has some sort of relationship to their lives.” I believe this is spot on. What worked in the past, may not appeal to generation Social. In Bloody Bloody Andrew Jackson, witty references abound. Some hit you on the head. Others are nuanced and might click hours later after the show. Hey, those were lines from TLC’s “Waterfalls”! Yep, this is not your typical history lesson, and thankfully it’s also not your typical musical. Or as they like to say, “history just got all sexypants.” 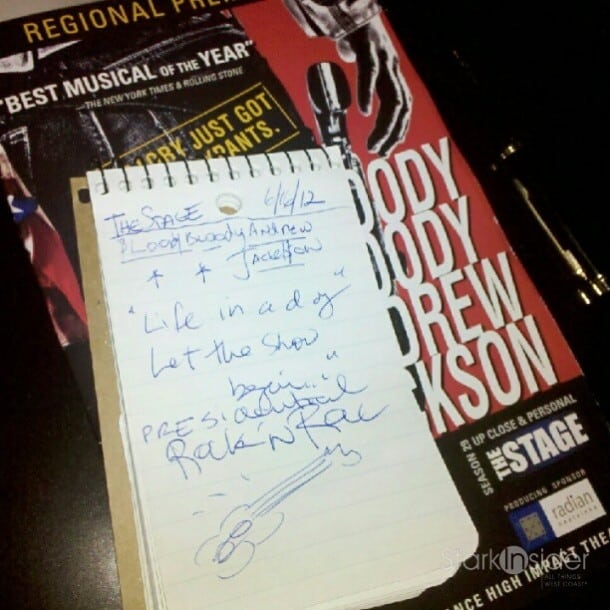