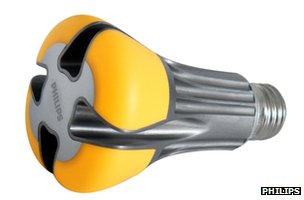 Promising lifetimes of up to 20 years, light-emitting diodes (LED) bulbs that are more energy efficient that curent models should  hit U.S. store shelves later this year. According to the BBC, the new EnduraLED from Philips is equivalent to a 100-watt incandescent bulb yet consumers four times less energy because of less heat loss (GE for instance uses a technology called “synthetic jet to help dissipate hot air).

The bulbs have no moving parts, no glass and no filament breakage. Prices range from $20-50 which could result in slow initial adoption.

In the past LED bulbs were primarily used primarily for spotlights and flashlights due to the omnidirectional nature of the light source. However, engineers have solved that problem and now they can achieve bright, even distribution of light.

It is suggested that LEDs can last for up to 100,000 hours, compared with the 1,000 hours of traditional incandescent light-bulbs and compact fluorescent lamps’ (CFLs) 15,000 hours.

A manager at the UK’s Energy Saving Trust said, “There are so many benefits: they can be smaller, brighter; it is one of those rare technologies where the trial has shown it performs better than the lighting systems it is replacing but, at the same time, uses less energy.”