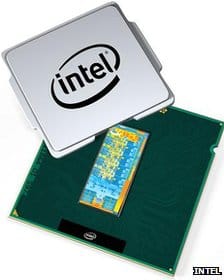 Intel has unleashed its newest lineup of processors. Sandy Bridge, it was good knowing you. Ivy Bridge, nice to meet you, see you soon in the 2012 MacBook refresh.

The new i5s and i7 chips – 13 in all – feature quad-core processors, lower power consumption, and, of course, higher performance. In an interesting design innovation, transistors will be stacked (instead of laid out flat). Perhaps taking a page out of the James Cameron playbook, Intel calls it “3D Trigate technology.” Impressively, the manufacturing process allows for 1.4 billion transistors in a scant 160mm2 die. Yes, these gates are incredibly tiny. To put it in perspective, you could fit 4,000 of them across the width of a human hair.

I was not necessarily blown away by the early benchmarks. So far, this looks to be an incremental upgrade. Intel estimates a top end Ivy Bridge i7 would perform about 5-10% faster than its Sandy Bridge counterpart. Early tests by PC World confirm the claim. I was hoping to see orders of magnitude in performance gains. However, given the dramatic jump in processing power in the last generation perhaps that was asking too much. Lower power consumption could be a big plus when it comes to battery life in mobile devices.

Apple’s refreshed MacBook range, due this quarter, could be the first high profile laptops to ship with the mobile variants of Ivy Bridge. Expect that to be the tip of the iceberg. Intel’s PC business chief, Kirk Skaugen, told the BBC, “There are more than 300 mobile products in development and more than 270 different desktops, many of which are all-in-one designs.”

The real big deal could happen in 2013 when Intel brings “Haswell” to market, along with it claims of up to 20 times better battery life. Now, if we could just find a way to jackhammer one of those guys into a Galaxy Nexus.