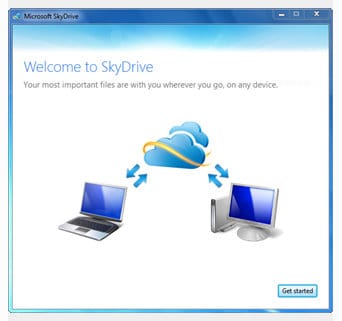 4 out of 5 stars - 'Smashing'
What: Cloud storage for businesses, consumers.

PROS
+
7GB free beats out Box, Dropbox; 1-click launch for Powerpoint, Excel and Word Docs; Dirt cheap upgrades (20GB for only $10/yr for example); Generous 2GB file upload limits bests competition.
CONS
–
Where's the Android app? Remembering my Live userid/password was challenging; Web interface is very Microsoft, circa 2002 (though the iPad app is appropriately modern).
VERDICT:
"Smashing"
Not likely to make me switch from Dropbox, but if you're a Microsoft shop this will be a great option. Google Drive, though, could be the 800-pound Gorilla.
Review by Clinton Stark

@clintonstark SkyDrive does have a public API available for 3rd party devs; the 3rd party Android app use it apps.live.com/skydrive/allap… 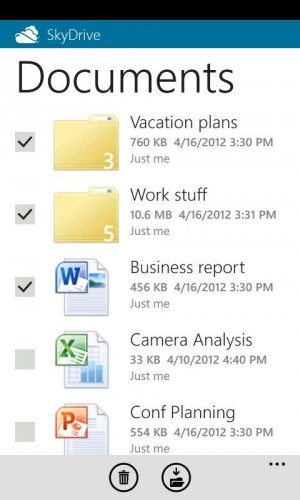 Cloud week is officially on. Last week, rumors were rampant surrounding the imminent launch of Google Drive. Leaks purported to show the new storage service running on Android. But Microsoft has jumped into the fray today with updates to SkyDrive (not to be confused with Skyfall, the upcoming James Bond film written with regular caps). You could say that Microsoft has beaten Google to the cloud… until you shake off that temporary moment of insanity and realize that Google is the cloud. Hubris aside, Dropbox and Box have carved out fast-growing businesses all from large hard drives connected to the Internet.

Will the likes of Microsoft — and shortly Google — take these starts-up down?

The updated SkyDrive while not blow-away amazing, has incrementally improved to the point of being almost best-in-class. Here’s what you get:

It’s decent, but likely won’t convert Dropbox fans or Boxers. At 7GB, however, Skydrive bests them both in terms of free storage (versus 2GB and 5GB respectively); unless, of course, you refer your friend in Idaho, your Aunt in Mississippi and your great lost second cousin in Istanbul, in which case you get a 5TB tarball prize.

I also like Skydrive’s more generous 2GB file size limitation. The other day I was trying to upload backup files to Box and discovered a paltry 100MB ceiling under the non-paid plan.

One challenge with testing Skydrive was remembering my Live userid and password. I seldom, if ever, need to login to Microsoft’s cloud services. Yes, Google, has me tethered to their ubiquitous cloud. 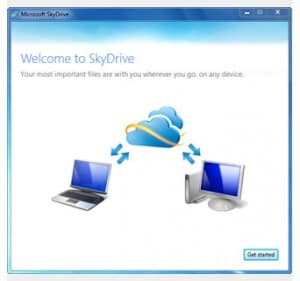 When I finally logged in, the first thing I did was upload a few files. Like me, if you already have a Skydrive account, you should do the same. Using the service will grandfather your existing 25GB plans without charge (update: be sure to click the sign up button next to the free service to receive the 25GB continuation).

Everything works as expected. The drag and drop is convenient. There’s no real rocket science with these cloud storage services. You get storage, you upload files, you get access. I won’t be using Skydrive on a regular basis, though, until Microsoft adds an Android app. Both Box and Dropbox (and Google with Drive no doubt) win in this regard.

As far as I can tell, Dropbox is the only solution with an application programming interface (API). Such an interface is especially important for enterprise users who will be able to build applications and scripts that automatically shuttle content to and fro the cloud. For instance we use Amazon Web Services S3 and automated scripts to backup our servers nightly. If Box and others want to compete for big iron types, then they’ll need to appease the developers with this type of capability.

Enterprise and small business users will appreciate the ability to create Powerpoint, Word, and Excel documents from within SkyDrive. That’s a unique advantage, likely only matched by Google later this week.

I also like that you can connect a host computer to SkyDrive and then access its files remotely. After entering a security code, I was able to access photos, videos, documents, including the Desktop and native file structure on a Windows 7 desktop via the SkyDrive web interface. It was surprisingly fast. Sure, remote viewing/access is nothing new, but it is convenient to have it build into the cloud.

Kudos to Microsoft for not blinding siding users by counting shared content from others against their own quotas. In effect, Dropbox double dips. Microsoft refers to it as a gimmick in this blog post, and I agree. With Dropbox (which is still my favorite service though that could change with Google Drive), if someone shares 250MB of photos with me and I accept that invitation, then that storage counts against my 2GB quota. Imagine if those same files are shared with 10 family members. All of a sudden, Dropbox is burning up 2.75GB of quota across multiple users, when in fact the actual hard drive space consumed on their servers is 250MB. I smell a rotten bagel.

The prognosis for cloud storage vendors can’t be good. Box and Dropbox won’t be able to compete long-term on price. That’s a sucker’s bet when Microsoft, Google, and Apple have sizable war chests, and broad product portfolios to feed their expansion into peripheral markets. For us consumers, price and simplicity are paramount. The start-ups in this space are better off heading towards niche, industry-focused solutions. If they remain horizontal, then, well… they’ll be enjoying a long-term horizontal position, also know as: death.

Links to the SkyDrive service: