Count me as an Amazon Web Services convert. It’s the cloud supreme. Today it could get even better with their freshly announced – and now live – AWS Marketplace, an online store for buying software. IBM, Microsoft, Check Point, SAP, CA, Zend and Magento are just a few of the vendors that are participating in the service that allows “1-click” application deployment on top of Amazon cloud servers.

I don’t know of any other vendor who comes close to offering as much power (to 8 core 26 ECU and to infinity and beyond), and as much breadth of offering (19 discrete platform services by my last count – see list at end of article) at prices that might surprise many small businesses, and even individuals running applications or doing development without the luxury of large budgets.

This, of course, is no real secret. Amazon is the world’s largest retailer. They’ve been at this a while, and know a thing or two about scale.

What is amazing is Amazon’s continual innovation and rapid deployment of new capabilities. Some suggest the company rolls out new features/software every three days. Sounds extreme to me, but perhaps not entirely far-fetched.

Last week they launched CloudWatch (note: their marketing team is lovingly – or frighteningly – obsessed with  the word “cloud”) which is a powerful, custom search index/server. Just before that they announced a smooth video streaming service for CloudFront, their content distribution network.

Because everyone loves online marketplaces, Amazon has taken out of the Apple iTunes (or is that the Google Play Store?) playbook and launched the AWS Marketplace. No-names it ain’t. Amazon has parterned with the who’s who of software. According to their announcement players include: CA, Canonical, Couchbase, Check Point, IBM,Microsoft, SUSE, Red Hat, SAP, Zend Wordpress, Drupal, and MediaWiki, among others. Applications run the gamut from CRM and app development to content management (my stomping grounds) and eCommerce.

SAP BusinessObjects 5, for example, costs $150/month, plus the lease time of a related AWS EC2 instance (a virtual server) which starts at $0.49/hour. With almost a single click (you have to review the order, choose a server size, and accept the license terms) you get a fully provisioned enterprise application, with no long-term commitment. Pretty amazing. I don’t know if IT departments love this stuff because it makes their live’s easier, or if they disdain the whole concept of “1-click” anything when the very idea could threaten job security.

WordPress, the granddady of open source content management, is also on offer, which should be of interest to magazines, newspapers and blogs across the land. It’s been there before. You could always download an AMI (Amazon Machine Image) which is a template of sorts for getting a server up and running with all the requisite technology (namely “LAMP” or Linux, Apache, MySQL and PHP). In fact, we use the Bitnami AMI and run Stark Insider on AWS out of their west coast data center. That was a recent move. Initially I used them for backing up our site nightly using their robust “S3” storage service. But all those tabs – all 19 of them – temp you; especially the ability to pay pennies to play. So I click “CloudFront” and soon enough we’re serving up this site using Amazon’s stellar CDN. Then it was Route 53 (for DNS). And, on an on. This is partly the appeal of AWS – it’s offering is so complete, and the dashboard so easy to use, it’s hard not to find yourself running your entire business on Amazon. Quick tip: don’t run WordPress on a “micro” server instance. Go for small or, in our case, medium. Yes, this will cost you more than a lot of mom and pop web hosts out there, but if you buy a reserve instance which is essentially an up-front pre-pay for a 1- or 3-year term you can almost cut the hourly rates in half. We pay about $.08/hour. That’s for a server with 3.7GB memory, 2 ECUs, 40GB. And I should note that Amazon’s database performance is among the most consistent (i.e. in my experience does not suffer from the bad neighbor effect).

Just as iTunes became the content hub – like it or not – for consumers, Amazon is in the leading position to become the application hub for enterprise IT and SMBs. I don’t see anyother vendor coming close at this point. My #2 is Rackspace. I highly recommend their cloud servers. They generally cost less, and I can attest first hand to their superb support. But their offerings are narrow by comparison. Though Rackspace offers servers, CDN, load balancing, they don’t have search, customized template for deploying custom configs, or some of the flexibility that AWS provides with instance management. Still, for risk managers, you would do well to balance out your cloud strategy by considering a multi-vendor approach, and I’d score Rackspace right at the top of the list.

Just as iTunes became the content hub – like it or not – for consumers, Amazon is in the leading position to become the application hub for enterprise IT and SMBs.

What it mean for small businesses

While the days of provisioning servers for businesses is, for the most part (niche applications/situations notwithstanding) history, the AWS Marketplace makes it even easier to develop, test and deploy apps using scalable, proven infrastructure. Yes, you will still need a techy person on call. Although there is “1-click” allure here to deploying your next web site, eCommerce or CRM system, you will still face the cursed Linux command line at some point. The important things, though like risk and cost are mitigated because of the pay-as-you-go model. Also (and this is an assumption I need to test) you can bet that by bundling up these partner offerings – be it SAP BusinessObjects, Magento or SugarCRM – that Amazon is standing behind their quality.

What it means for enterprise

If you’re in an enterprise IT department, you already know AWS – possibly inside out. Most organizations are likely hybrid, with some in-house server deployments combined with cloud capability for those that require less security. One downside is that your internal clients are now even more likely to skip IT and go it themselves. Yep, you’re favorite client. We don’t need IT, we have Filemaker! Then again, choice always exists. For testing configurations, and setting up temporary services AWS is ideal. And we know its robust enough to support some of the largest, most CPU-intense apps out there. See Netflix for a prime example.

What it means for publishers

It might seem odd to throw in publishers into the mix. I am one of them. We started small, and are growing. While we’re far from huge, or even mid-sized, our sites – Stark Insider in particular – continue to grow. By my estimation I’ve over-engineered the heck out of Stark Insider, for the very reason I don’t want to deal with technical scale every few months. I’d rather go at it in a big way (as we did over the past few months), put all the pieces in place (AWS, Rackspace, Media Temple, etc) and then get back to the task at hand: creating content, striking up partnerships, extending our reach, etc. If you’re starting to hit 5-10K pageviews/day, you should consider scaling up. Speed matters. Google will reward or penalize your site accordingly in its rankings. Beyond that, there are the pragmatic reasons to go AWS. Once you’ve outgrown your hard drive (volume), with AWS EC2 you can detach the drive, deploy a new, larger one, and then re-attach it. All with little disruption. At the end of the day, this is still technology. Readers don’t read you because of your server. But if you’re pageloads are slow, and your Google rankings aren’t as good as they could be because your’e serving up content off a $7 GoGaddy account (avoid like the plague) then business will suffer.

By my count, as of April 19, 2012, Amazon Web Services has 19 products available (brace yourself for naming fun). Bold denotes services we use here on Stark Insider:

I selected a SugarCRM app. For small businesses looking for low cost, but full-featured sales force automation this is a good option. I chose the app and then clicked continue. From there you have two choices. You can launch using “1-click” or you can use the standard EC2 server deployment which is a bit more involved, but provides more flexibility in the provisioning of a server.

I chose Northern California for the test, and because I was just testing, I chose the “micro” server instance (which you shouldn’t use for production). It comes configured as follows:

This configuration costs $.025 per hour, or approximately $18 per month based on 7×24 use (with AWS E2 servers you can stop instances which stops billing until re-started). A more realistic server would be the small or medium instance which come in at $64 or $130 per month respectively. Of course, this will depend on number of users you plan to give SugarCRM accounts to, so plan accordingly. The only decisions you need to make when selecting the 1-click launch are server location (Virginia, Oregon, Northern California, Ireland, Singapore, Tokyo, or Sao Paulo) and the size of the server (micro, small, medium, medium, or medium-high CPU).

Once I clicked launch, the whole process was shockingly fast. In under 5 minutes I had SugarCRM up and running (granted, on a micro test instance with no user configuration) on the cloud.

Note, that in addition to the server instance, the set-up process in this case also provisioned a hard drive, or a “volume.” You will be charged monthly by the gigabyte ($1/month in this example). Also, you will pay for bandwidth out. To help you estimate the entire cost of using AWS, be sure to us their simple pricing calculator. Storage costs and bandwidth are inexpensive ($0.10/GB out of Virginia and data out rates free for first GB and about .12/GB after per month). Though not as cheap as going to Fry’s and buying your own hardware, keep in mind this comes with security, and is running on robust infrastructure that you don’t need to worry about maintaining.

And there we have it, a fully running instance of SugarCRM in less than 5 minutes, for $60-$130 per month: 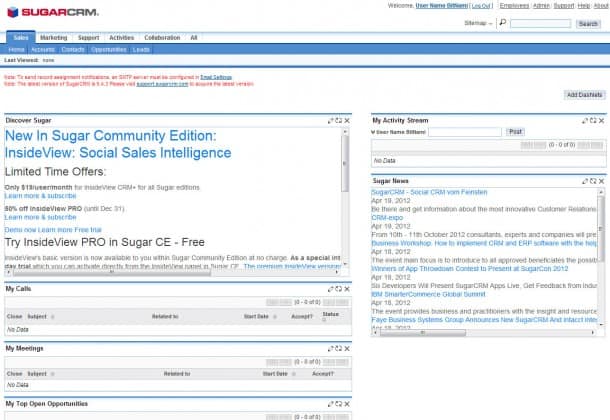 When I’m done testing, which I did purely for this article, I blow away the EC2 instance by selecting “Terminate.” AWS takes a few minutes to close it all down. Total cost of my test scenario: about 0.01. Plus, 1 Diet Coke.