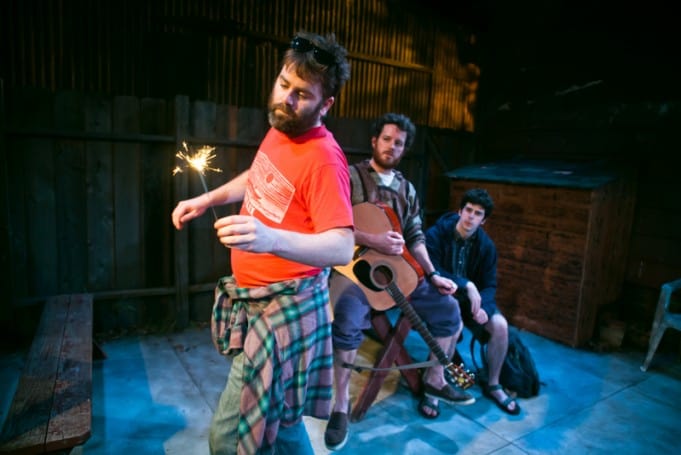 The word “ladder” is significant in The Aliens, a new work by hot playwright Annie Baker.

In an initially haunting scene, it’s repeated in mesmerizing fashion by slacker KJ (Haynes Thigpen) sitting on a picnic table in the back of a Vermont cafe. Staring blankly, recounting his past, he says “ladder” over and over, and over again – rising in volume and tempo, before coming back down again, echoing the slow, unpredictable cadence of the play itself. Unfortunately, it blows past the tipping point, and alternately abets frustration and bafflement in its attempt to test our patience. Worse still is the overuse of extended silence. I’m all for letting a story unwind, and am thankful we have the stage to give us a break from the relentless CGI effects and Tweet storms we’re bombarded with daily, but there comes a point when momentum is lost, when all we can hear is the theater HVAC for minutes at a time.

That’s too bad, as the performances here are exceptional.

Once again, SF Playhouse is a (cozy) showcase for top notch acting. Haynes Thigpen and Peter O’Connor deliver nuanced, introspective performances that are not soon to be forgotten. There’s a Kevin Smith vibe in Baker’s presentation that soaks the affair with a gritty, slow motion tension of sorts. These guys act their hearts out — singing, philosophizing, jamming — and, yet, despite my appreciation for their acting chops, I couldn’t connect in the least with their characters… at all. So it didn’t really matter when something unexpected later happens and there’s an interruption to the regular drug-induced chit-chats. Unfortunately their ambitions, dreams and hopes were ultimately unclear to me.

I readily admit to perhaps not getting it – many apparently do as the work shared the 2010 Obie for best new play. I much preferred Annie Baker’s take on Asperger’s in Body Awareness where the drama and comedy were balanced and moved the story forward, with less reliance on the silences that, in this case, did not speak volumes.

See it and prove me wrong. Despite my objections, the stoner dialog feels brave, authentic, and proves Baker’s enormous talent for capturing raw truth. A July 4th celebration was particularly moving. The set (Bill English) is yet another miracle; there we were in a back alley, behind a cafe – an amazing feat for such a small space.