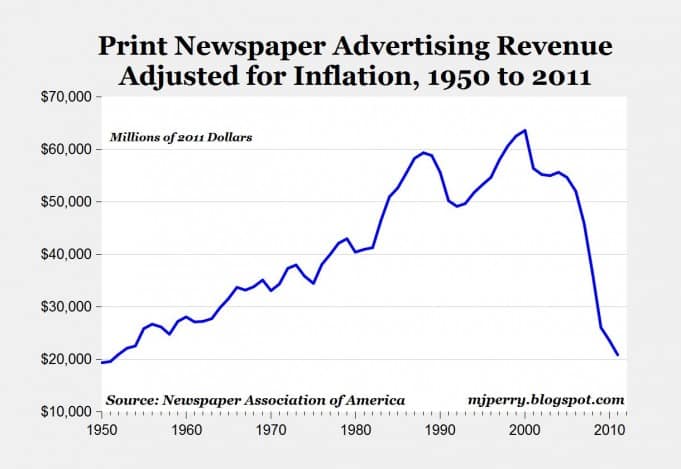 I don’t want to beat the proverbial dead horse, but these recent charts we’re seeing about the newspaper industry tell us everything we need to know about the rise of new media – and decline of a centuries old business. This time we’re looking at the decline — crash — of ad sales for print newspapers via the Newspaper Association of America (kind of sad to be reporting about your own demise): 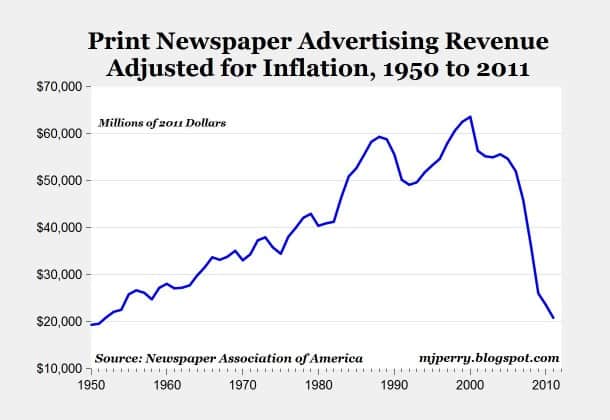 Examining the chart invokes a bit of dot-com nostalgia; up and to the right, before crashing in dramatic fashion. Unlike tech with its rapid economic cycles, this birth-to-death story played out over a century or two.

Newspapers, of course, aren’t really dead. Last time I checked we still have the San Francisco Chronicle, San Jose Merc, USA Today, NYT, WSJ, etc. What’s dead is print. The drop in ad revenue for print has been offset by a rise in ad revenue for online. I’d be interested to see how that shift played out, and if the macro view for online has yielded an overall growth in ad spending (my guess is yes).

Newspaper moguls can thank Steve Jobs and Apple for ever changing their world – just as music, film and television moguls did before them. According to reports the new iPad has blown the roof off, and has become the best-selling model in its (short) history.

Classifieds used to bolster print. That disappeared long ago when eBay and Cragislist took away that business by moving it online.

While they’re not all independent anymore, they once were. And they’re arguably more recognizable, and certainly more influential than most regional — even some national — newspapers.

Why advertise in a newspaper when you can advertise with Google (or Facebook)? Only a short time ago, we could not target audiences with the degree of accuracy that we can today. Want to sell dance lessons to women 25-35, living in San Francisco, interested in Dancing with the Stars? You can do that. Google made $36.5 billion in ad revenue last year. That’s over half of the entire newspaper industry at its peak.