The life of a clown is no laughing matter. I learned last night that it can often be like a cross between a somber silent film and an Evil Knievel stunt special. Lorenzo Pisoni would know. Having a clown for a father taught him early on that earning a laugh was something truly special; the long hours perfecting timing, extracting every ounce of comedy out of a sight gag was worth it, even if it meant only making each other laugh in an old church on Potrero Hill.

In Humor Abuse, Pisoni – bearing more than a passing resemblance to Ben Affleck – takes us down memory lane. He recounts a life under the big top. At six years old, his father worked him into his act as part of the Pickle Family Circus in San Francisco. Soon enough they were inseparable. They did every together as they toured across the country with a show that was unique, intimate (without circus animals).

Over the course of 80 minutes, we see touching photos of father and son working on routines, and we experience wonderful reenactments – it astounds what can be done with red felt, and old garden hose. A steamer trunk, all 9 cubic feet of it? Pure gold.

Pisoni’s father Larry was a perfectionist. He poured himself full-on into the craft. “Do it again” was a familiar refrain as little Lorenzo would try and try again to balance a hat on his nose. Living in a circus family also meant receiving interesting presents: antlers, masks, hats (and more hats). At times all Lorenzo wanted to do was run away from the circus.

Years later, Lorenzo learns that he never knew his real father. He knew Pickles the clown. And despite the circus-like set, the routines, and laughs, some of the best moments come when Lorenzo wistfully recalls the not-so-pleasant times. Humor Abuse is as much about the big top as it is a relationship between father and son. 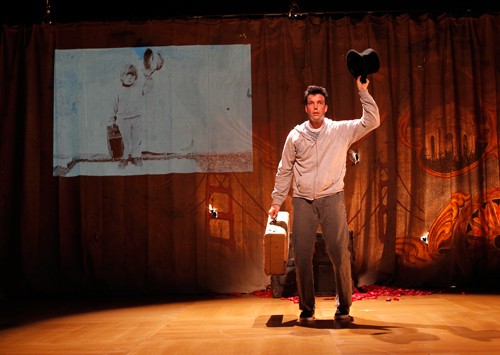 This is a thoughtful, touching and thoroughly entertaining memoir. I appreciate that A.C.T. keeps their seasons fresh. By inserting a surprise here and there, we get a breather from the (superb) core residence, and see the stage in a whole new light. In the past, shows like Carey Perloff’s gorgeous The Tosca Project and Seana McKenna in Phèdre come to mind as other high points.

Despite being so personal, Humor Abuse reminded me that when it comes to fathers and sons, the apple doesn’t fall far from the tree — although, in my case, I’m not likely to create a revival show around my father’s infamous “Wiggle Worm” (teachers will do anything to grab attention). And, most importantly: laughter is always best with company.