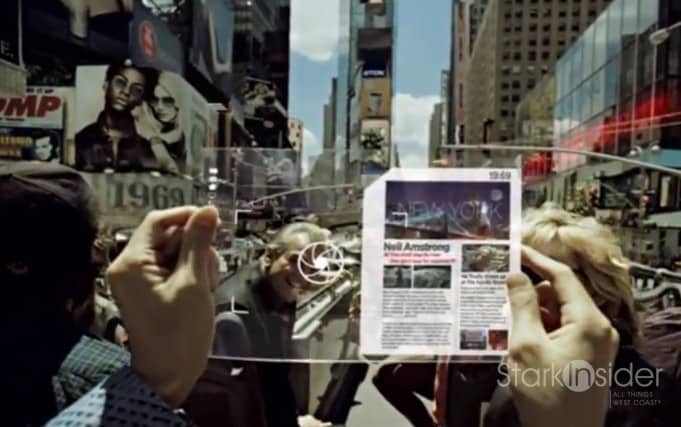 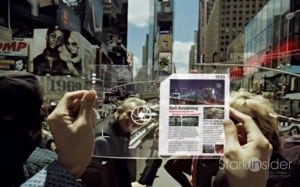 Despite the blue economy, and even pockets of social unrest (Occupy Wall Street), 2011 will go down as a strong year for tech.

Unlike other parts of the country, Silicon Valley is doing relatively well. Job growth is respectable, unemployment rates are dropping, and that iconic symbol of innovation, the startup, is surely in vogue.

One thing I’ve learned here over the last 13 years is that no two years are ever the same. And what goes up, must come down… before skyrocketing once again.

There were plenty of big stories too. Steve Jobs. Android 4.0. The Netflix debacle. The Mark Hurd/HP debacle. Apple iPad 2. SOPA. Sony’s outage. And on and on. 2011 was truly a year of big headlines.

Here’s some of my picks of stories, tech trends–some large, some small–to watch for.

We’ve heard about them before. Bendable OLED displays would allow us to fold up devices like a newspaper, or at the very least, allow them to flex to feel more comfortable in everyday use- when storing a smartphone in a pocket for example. Transparent versions would amaze with possibilities; navigation, games, social networking, niche applications for security, healthcare (and countless other industries) would be turned on their collective ear.

We all love to talk about the “tablet wars.” In 2011 that turned out to be a non-event despite the hype surrounding the RIM PlayBook and Motorola Xoom at CES way back in January. We know how that played out. It was a bloody mess. A dog’s breakfast, as my Dad might call it. In 2012, though, look for the expansion of tablets into product lines. We’ll see multiple sizes offered (evidenced already by the Amazon Kindle Fire). Expect not only 7″ and 10″ tablets, but even larger ones (12″ anyone?) and sizes that bridge the smartphone/tablet gap. Just like laptops proliferated in the early days, expect tablets to do the same- one size will not fit all.

3. Laptops go CD/DVD-less (and not a moment too soon)

Not exactly a ground breaking prediction here. MacBook Air is the perfect example. With the cloud, flash storage, and streaming services, there’s no need for vendors to include a battery-sucking, scale crushing DVD drive.

Apple’s vertical integration strategy (hardware/software/services) continues to play out in an epic battle against Google’s distributed/horizontal approach. Who will win? Both. The have-beens are already, unfortunately, sucking wind at the roadside. So long RIM, Nokia (are you even in the US market?). One word for Microsoft when it comes to smartphones: Uphill.

Gestures are here to stay. True, a well-placed knob will often be the better choice in a car where tactile response is required, but there’s no doubt Mercedes, BMW, Audi, Lexus and others will continue to embed touch systems into their luxury models, especially for the entertainment systems. But there’s another angle. Just as we love to personalize our smartphones, we will also want to personalize are dashboards. You like a large speedo? No problem. Your car will display your “skin” of choice, while your significant other will get their own personalized dashboard.

In the early days, circa 1995, hybrids were quirky, dedicated models such as the Toyota Prius and Honda Insight. But the new thinking is hybrid as an option. Like the Lexus ES? Great. Do you want the regular or hybrid edition?

Video auto-focus DSLR is already here (Nikon D7000 for instance). But these are early days, and the technology has a ways to go. Camcorders already auto-focus when shooting video. DSLR requires manual focusing. Expect big improvements, though, in the way DSLRs handle processing of video and the algorithms used to control the lens focusing.

8. Chrome morphs into an OS

It’s already happening. Chrome is a lightweight OS and can run apps. Slowly but surely Google is adding more functionality (support for peripherals such as game controllers for example). Chromebooks, dedicated netbooks running Google Chrome, were a misstep. Not because the concept was wrong. Like the Newton they were too early to market. Want to know why Redmond is nervous. Look carefully at Chrome. This is not your grandfather’s web browser.

Samsung’s Galaxy Nexus was big news. Featuring a gorgeous, iPhone besting 4.65-inch display, it was the first Android smartphone to run Ice Cream Sandwich. Google’s nextgen mobile OS is pretty, but still disparate. There’s more to do. The potential is there. And Android 5.0 will change the game… no longer will Apple own the best user experience.

DirecTV, Comcast… will they adapt or die?

BONUS: The return of the mega-IPO

Back down to earth: Groupon, Living Social… and just about any over-hyped coupon play.