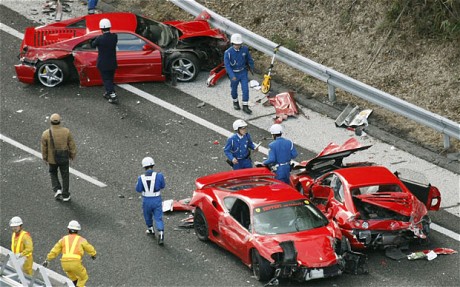 Warning: Auto enthusiasts may want to skip this story.

Hopefully Geico (or its Japanese equivalent) customer service reps are up to date on replacement values for crashed exotics such as a Ferrari 355, Ferrari 360, Nissan GT-R, and Lamborghini Diablo. Oh, and because this was a green certified crash, let’s also throw a somewhat undermatched Toyota Prius into the fray.

“A gathering of narcissists.”

The crash happened near Hiroshima in Japan, where the supercars were caravanning to an event. Reportedly traveling at speeds of 85-100mph, one of the Ferrari drivers (60-year-old businessman from the city of Fukuoka) triggered the massive pileup when he tried to switch lanes, and hit a guard rail.

With cars and debris scattered everywhere, police shut down the highway for 6 hours for cleanup–including a massive amount of therapy and ego reassembly.

Fortunately no one was seriously hurt in the accident.

Total estimated damage is around $4M, with several of the cars “beyond repairable” and likely to be completely written off.