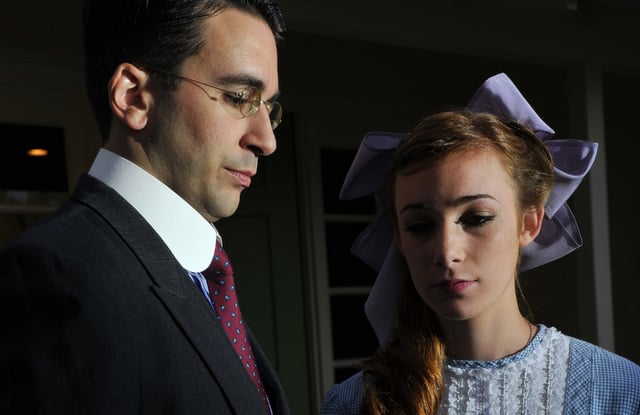 Ed.- Heads-up! This review of Parade, a musical based on actual events, contains spoilers.

Tragedies and the stage aren’t exactly strangers. Theater can move us in many ways. But how about a musical set against the drama of a double tragedy intertwined with rape, racial tension, and lynching? Right-o, let’s dance!

Palo Alto Players has pulled off an unusual feat. With its compelling, gorgeous production of Parade, the community theater has delivered far beyond my expectations and proved that real-life tragedy can make for a fine, if slightly off-beat, musical.

The Dream of Atlanta

The production is based on actual events and what many consider the “hot-button” trial of the 21st century. It’s 1913, and a thirteen-year-old girl, Mary Phagan, is found raped and murdered in the basement of a factory. Two suspects are arraigned: Jim Conley (Brian Palac), an African American janitor; and Leo Frank (William Giammona) a Jewish superintendent at the factory. Tension in the Atlanta community mounts. Soon, there are demonstrations, and a potential conspiracy related to ensuring that someone is held accountable. Ultimately, in spite of bitter denial, Frank is found guilty and sentenced to death.

Years later the case is reopened, and Governor Slaton (Doug Mallon) commutes Frank’s sentence to life in prison due to damning issues related to the trial and the lack of credibility concerning key testimony. It didn’t matter. A lynch mob took matters into their own hands. Frank Leo was handcuffed, driven 175 miles to a small town outside Marietta, Georgia, and hung from a tree in his nightshirt.

As a cautionary tale, Parade is a bitter pill to swallow. Wrong after wrong appear to get the better of those involved, and re-watching a travesty of justice can be frustrating. At its center, though, is a courageous story in Leo Frank and his wife Lucille (Alicia Teeter) who fight the system. It’s inspiring, no matter where the truth lies. During the process their relationship grows closer–this is especially well captured over the course of two hours.

Palo Alto Players does wonders with this production.

I was smitten by the beautiful costumes (Mary Cravens) and moved by the work of the 9-piece orchestra (led by conductor Matthew Mattei).

In William Giammona and Alicia Teeter we have two leads who need to convince us that they are pursuing truth, and not willing to give up, despite their world having turned upside down. They succeed remarkably in performances that ably anchor a substantial cast, both in talent and numbers (18).

In one court room scene a witness recounts his version of the events that went down that fateful day when the girl’s body was discovered. Giammona adeptly transforms from stern, cross-armed defendant, into a would-be pedophile; dancing, groping a row of young girls, all while singing (don’t worry it’s more entertaining, less harmful than it sounds).

By my rough count, there are over 50 people involved in this production. And to think, this is community theater! At times, I felt like I was watching a TheatreWorks production–everything has an air of polish and quality not normally seen at this level.

In addition to the talent on stage, the material works because it is honest. There are no black-and-whites, and certainly no triumphant HAIR-like, balls-to-the-walls jumping jacks. It’s not often you see so many complex themes–anti-Semitism, class politics, child labor, yellow journalism–presented with such elegance, without requiring hours of intense dialog. In that sense this musical represents what makes theater so important: It’s on-going vitality, reminding us that we are often emotional, sometimes volatile and ever learning.