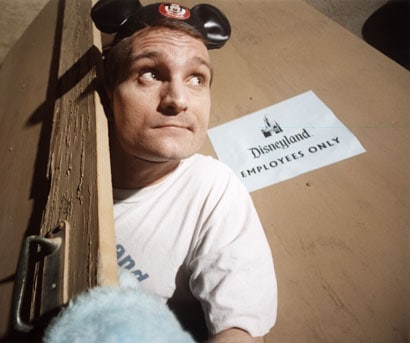 Working for the Mouse

Theater Review: Working for the Mouse by Trevor Allen.

A real Disneyland party doesn’t feature Tinkerbells, ceremonies or parades. No, no, no. How about pirates downing peach schnapps, Hercules and Tarzan running loose totally nude, and Tweedledum and Tweedledee doing lines of coke in a bathroom as out-of-control Tiki drummers provide the beat? That would be Trevor Allen’s condo in the 1980’s (this, after all, is a period piece). He had invited over a few guests, and handed out fliers to fellow workers at the famous theme park where he worked. Next thing he knew, 300 people were cramming his tiny place, the police were on the scene, and just like his short-lived career working for the mouse, it was all over.

“You’ve just been fired from the happiest place on earth. Where are you gonna go?”

Turns out, Main Street USA can look quite different after dark and behind closed doors, where a sweat-soaked Pluto sits with head at his side dreaming of someday getting to play Peter Pan; he was oh-so-close to attaining his dream of never growing up.

In Trevor Allen’s Working for the Mouse which opened over the weekend at the EXIT Theatre in San Francisco, there are no height restrictions to get on a ride. Hell, there are no restrictions, period. Sure enough, it doesn’t take long for the newbie, along with his Alice in Wonderland unit, to have several run-ins with the Disney way. And all Allen wanted was “voice clearance” so he could ditch the Pluto costume and get real face time “in park” as his dream character, Peter Pan. What follows is an entertaining, no-holds barred look at life as an employee of Disneyland. There are lots of rules and processes, we learn, that keep the Kingdom in order.  At one point, after getting caught on a ride in costume, Allen is reminded, “There’s the right way, the wrong way, and the Disney way.” Or Mouseschwitz as the rapscallion team of performers referred to it.

I couldn’t help but think that Allen was like a theme-park version of DeNiro in Casino, taking us on a behind-the-scenes tour, exposing the gritty reality–filled with sexual escapades, f-bombs, in-fighting. If the Magic Kingdom is all that glitters, fairy dust and all, for children then this solo show is in a sense the unplugged edition, warts and all, for adults.

“The Mouse House is open!”

In 1996 the solo show debuted in an abbreviated form at the San Francisco Fringe Festival where it took top honors. After honing and expanding the idea, Allen took it to Impact Theatre (Berkeley) in 2002, receiving strong reviews and selling out. And now, its revival seems most prescient. With the economic malaise, there is double meaning to the notion of superficial gloss in the wildest theme park of them all: America.

This is a surprisingly and impressively physical performance by Allen. For over eighty minutes he plays multiple characters, jogs around the stage (which consists of a small bench in the center, and drapes along the rear brick wall), sings, walks on his knees as his undersized boss Gary (Donald Duck), performs various impressions of Disney characters, and, in several of the best scenes, reenacts interactions with parents and children. I’m guessing it’s as demanding as performing in a heavy fur costume with almost no ventilation, in 110-degree SoCal heat (or 100-degree depending on who you ask) for 10 hours. Oh- then there’s the part where he gets kicked in the balls by Little Johnny, while his father asks inane questions. As the Mad Hatter, which Allen has brilliantly perfected, it brings out one of the best lines, “If you don’t think, then you shouldn’t talk!”

Despite a minimal set, we are convincingly brought back in time as Allen recounts one story after another: as Pluto on a pirate ship; losing his head (literally) in the bushes, auditioning for Peter Pan, and assembling an impromptu game of baseball featuring an all-star Disney cast. Credit to director Nancy Carlin who uses space to its utmost, and keeps our attention squarely on the subject matter.

One minor nit is the pacing. It’s a high-octane show, dialed to 11. It could use an occasional break from the frenetic chases through the park, and allow us to perhaps get inside Allen’s headspace at the time.

WATCH: “Working for the Mouse” with Trevor Allen

Disneyland Exposed: Working for the Mouse from Stark Insider on Vimeo.

I’ve fallen into the trap many times of suggesting a play would make for a good film. And so it goes again. The material here would easily make for a Kevin Smith style slacker (like Mallrats or Clerks) mashed-up with Casino (for the behind-the-scenes aspect) topped with a dollop of Taxi Driver (for that loner, nihilistic aspect – not that Mouse focuses on it). As for the likely call from Disney lawyers, I’d take Allen’s suggestion and invoke “fair use” and quote Lenny Bruce, “they can go BLAH themselves.” After all, as Trev writes in the program, this is his life he’s talking about. “So, please… feel free to laugh.” Judging by the reaction of the sold-out house on Friday night, we were most willing participants.

Working for the Mouse