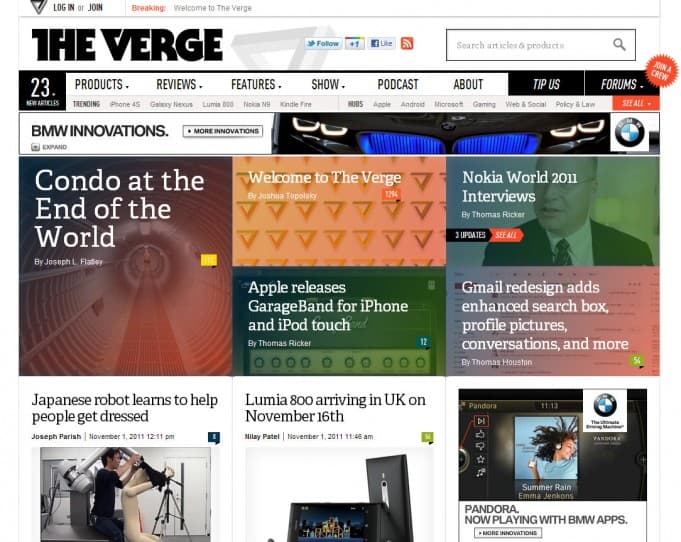 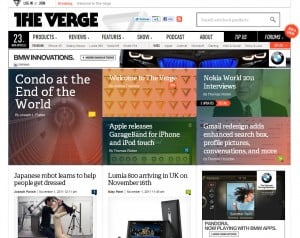 Does the world really need yet another tech blog? Today, The Verge, helmed by editor-in-chief Joshua Topolsky (formerly of Engadget) and backed by SB Nation, launched after a months-long build up. In a welcome post Topolsky writes, “We’re focused on bringing you.. the best and most comprehensive coverage of the consumer technology world. Not just the nuts and bolts, 24-hour news cycle stuff, but more in-depth coverage, bigger stories, and content that goes further.”

Indeed after spending a few minutes on the site, the team does at V does appear to be following through on the idea of longer form content. A review of the Samsung Galaxy S II for T-Mobile (7.7/10), for example, is as meaty in content as it is gorgeous in layout.

Unlike traditional blogs, the design of the landing page eschews the standard scrollable blog post stream in favor of a decidedly cool and slick magazine aesthetic- which, by my eyes at least, may even channel a bit of Road & Track.

The content geyser has exploded. By my last count V has over 30 Google Search-pleasing entries and counting.  Many entries are typical tech fodder–reviews, product announcements, FCC filings. There are a few interesting signs, though, that this will be highly differentiated from other fare. As noted, posts are longer, and there are also interviews (Nokia World) and intriguing in-depth stories (survival condos). Ground breaking? Not necessarily, but it potentially paves the way for a more thoughtful approach to tech coverage, and if this is Topolsky and team’s vision then I think it bodes well for their readership numbers. It does help that the former Engadget chief was able to land several late night spots on the Jimmy Fallon show. Many of the faithful have appeared to followed him in droves to the new gig. His intro post along has over 1,200 comments, and the site appears to be re-defining the concept of engagement (the forums are off to a fast start with lots of active conversations). 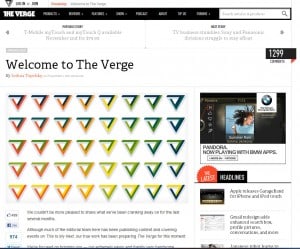 So how does The Verge compare to the tried-and-true?

It’s far less snarky and boy-racer than something like Gizmodo, whose street cred dropped massively in my books when they got ensnared in the iPhone-in-a-bar scandal last year. It was an embarrassing cycle of gloating, preening.

Engadget is heads-and-shoulders above for those looking for the latest speeds and feeds. It is what it is, however, and you don’t come to these content wheels for much other than product announcements.

TechCrunch focuses on venture, and the enterprise, so if you read that already, you’re not likely to replace it — although their incessant penchant for soap operas and he-said/she-said diatribes is a bit… icky.

Venturebeat is a class act, and a great Silicon Valley-based blog I’ve been reading for quite some time. Far less commenting, but, on the other hand, far more quality.

Mashable is the place for social networking news and stories. The team can be hyper-obsessive. I’ve lost track of the number of posts they’ve published on Google+ but it’s mind numbing. So is their Steve Jobs coverage. No doubt, it’s a great site, but often it’s like a little puppy chasing down the nearest ball that draws attention.

And that leaves The Verge.

So far so good. I’ve added it already to Google Reader, and like what I see. It’s obviously too early to tell, but we may look back on November 1 as the day that the bar for tech blogs everywhere was raised.