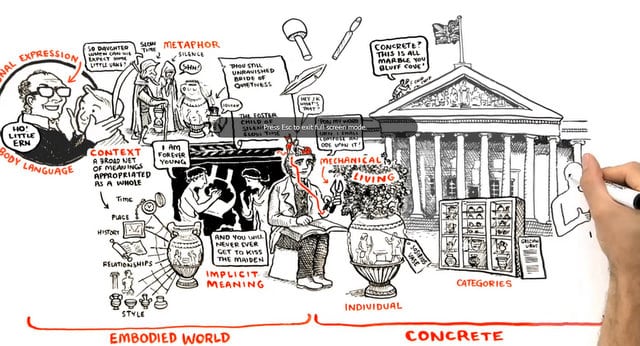 “The intuitive mind is a sacred gift… and the rational mind is a faithful servant.” — Albert Einstein 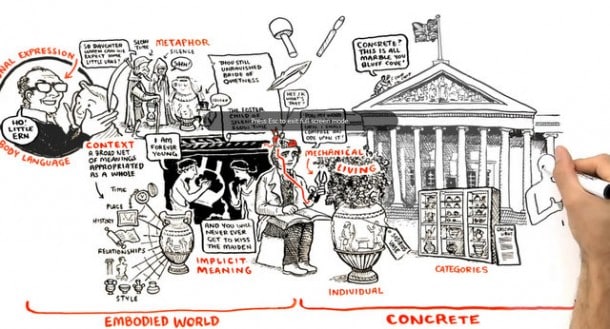 I admit I’m a sucker for slick presentation- especially when it’s paired with strong educational value, like the RSA Animate videos.

Have you seen them?

You’ll recognize the unforgettable, mesmerizing style the second you see it: an animated whiteboard featuring an anonymous hand scribbling, diagramming and doodling along to a high quality presentation. It’s kind of like a UPS Commerical paired with Oxford for Dummies.

The latest in the series explores the brain, and attempts to debunk the left brain/right brain dichotomy we’ve all believed to be true. Apparently there’s much more going on here than originally suspected. I say apparently because I wouldn’t know if what Iain McGilchrist is saying here is true, or an at-the-edge, untested hypothesis.

I was actually reluctantly pulled into watching this vid by my doey-eyed little Loni, who insisted I put down that social network twanger (MacBook Pro) and learn something (yes, even after dinner it’s possible!). Just like a TED video, it took all of about 10 seconds before I was hooked, marveling at the clever presentation and engaging content being delivered with a steady, English accent.

If you’re intrigued by the brain (btw- it’s not evenly shaped like the skull that protects it… discover the twist as to why in the video below!) or want insight into human behaviour, culture and society from a renowned psychiatrist then do carve out about 10 minutes or so of your social networking hour to follow that magical magic marker…