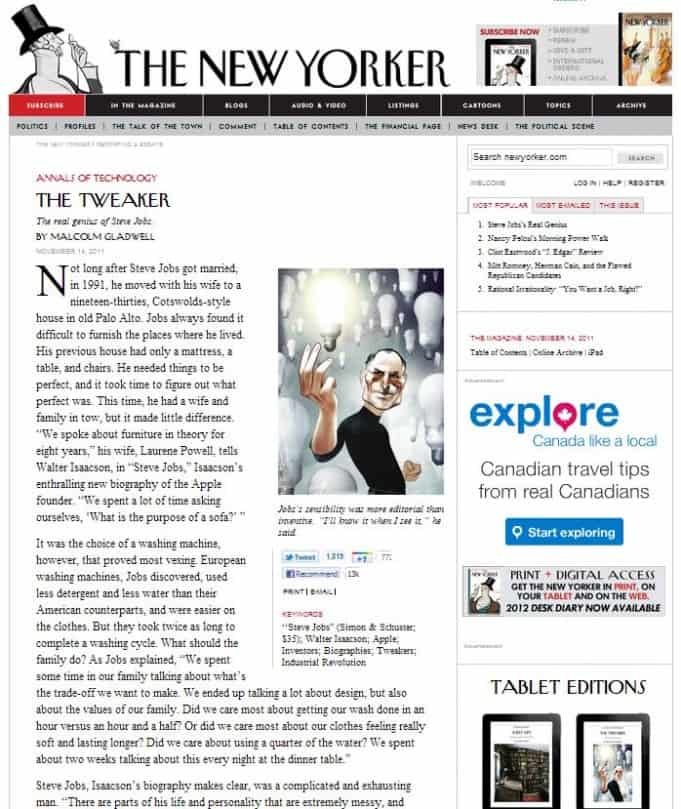 Malcolm Gladwell, in a thoughtful piece in The New Yorker, refers to Steve Jobs as “the tweaker.” He may have been brilliant, but his inventing was of the editorial kind. “I’ll know it when I see it,” Jobs is quoted as saying, frustrating designers and developers who wanted more to go on.

Most refreshing, though, about Gladwell’s take on the legend and his bio is its balanced examination of a man who relentlessly pursued perfection yet was far from it himself. Many gloss over the fact that Jobs once fathered a child, denied it, and abandoned the mother. “Steve Jobs, Isaacson’s biography makes clear, was a complicated and exhausting man.”

No stranger to entertaining readers, Gladwell nips and tucks key passages from Walter Isaacson’s “Steve Jobs” and assembles his own thoughtful retrospective.

Like me, if you have yet to read the bio you’ll find this a remarkable abstraction, taking us from the kitchen table where the Jobs family discusses the merits of European washers and the requirements of family laundry, and the compulsive-obsessive behavior that had him lambasting hospital staff over the design of an oxygen monitor to his outward hatred for Google (“Outside of Search, Google’s products—Android, Google Docs—are shit”) and his last days obsessing over the design minutia of Apple’s new HQ in Cupertino.

I admit to not being well-versed in Gladwell’s Blink and The Tipping Point; after reading his thoughtful piece in The New Yorker, I may just go and pull those classics off the shelf. 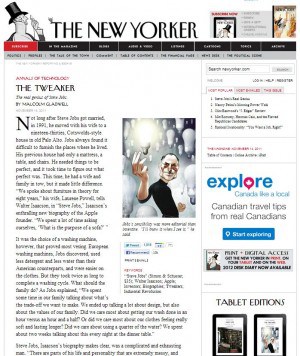