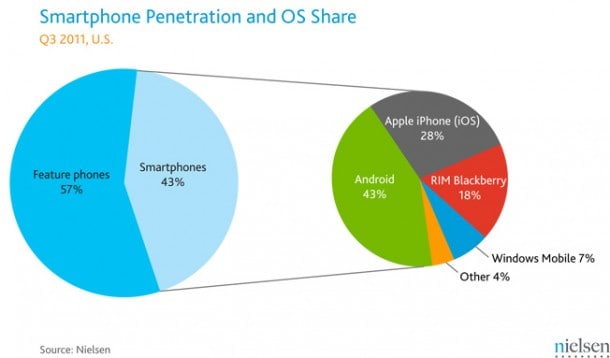 Android continues to roll. Although the last few days have been slightly bumpy for Google–buggy Gmail app angering the faithful, then a Gmail web refresh receiving mixed reviews–at least it can count on its world beating mobile OS to deliver the goods.

According to Nielsen which just reported on Q3 mobile share, Android gained 4% Q/Q, while others stayed flat (Apple iOS) or fell (RIM). When it comes to smartphone vendors, though, Apple still comes out on top with 28% share of the US market.

Is the mobile market saturated?

What continues to amaze me is that just a few years ago Google was not even a player in the space. That means in a period of about 24-months the company was able to (1) bring to market an open source OS; (2) sign-up significant numbers of partners (HTC, Motorola, Samsung) to design and sell handsets; (3) establish strong presence at point of sale (most notably Verizon in the “early” days); (4) persuade a massive army of developers to build apps; and, most importantly, (5) get consumers excited and ready to buy an Apple smartphone alternative with equal appeal.