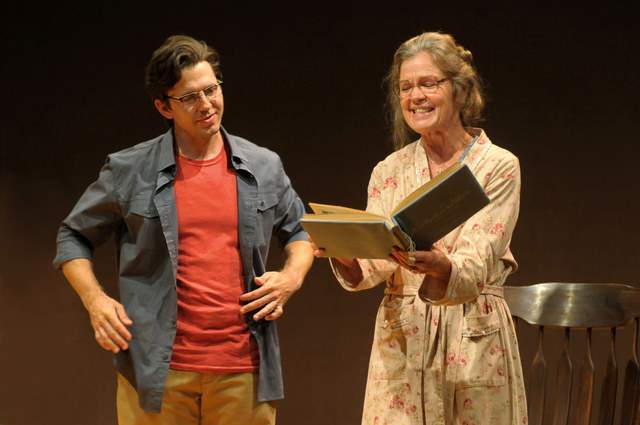 We can generally agree that talking about religion (and politics) in mixed company is a bad idea. Of course, that hasn’t stopped Fox News, CNN and other outlets from making it a prime time spectacle. Fortunately, we can wrestle with some large, profound ideas around that very topic in a more layered, thoughtful approach thanks to the magic of the live theatre. Cliched gushing aside, I’ve witnessed some marvelous examples of the form — Cormac McCarthy’s mental shadow boxing of sorts in the dark, brooding The Sunset Limited staged last year at SF Playhouse comes immediately to mind. Now Berkeley Rep, with How to Write a New Book for the Bible, has also gifted us something truly special. If the goal of theater is to provoke, to stimulate then consider this world premiere a win, win.

At the center of the piece is a tight-nit family. And like Fincher’s Fight Club–less the neo-fascism and the Project–there are rules that all must abide to when engaging in a “fight” … of the intellectual variety, sacraments to the family.

The father, Pete (Leo Marks) is an eternal optimist even when diagnosed with inoperable cancer. He tells his two sons, jock Paul (Aaron Blakeley) and scholar Billy (Tyler Pierce) to never leave a room before a fight is finished. Meanwhile back pains has left their headstrong “Biblical” mother (Linda Gehringer in an extraordinary performance), no stranger to a feisty bru-ha-ha herself (“I don’t want butter!!!”), restricted to a house-bound lifestyle that alternatively involves micro-managing the goings-on, denying herself the truth about aging, and celebrating UBC game-winning field goals.

So what’s this all have to do with religion?

This family story is told as perhaps a domestic rendition of the Bible – that a family, be it this one or Jesus, Mary and Joseph, each have their own tale, each unique, special and worthy of inclusion in a book for the ages. Billy, a writer who wants to write “what he knows”, also narrates, breaking the fourth wall, and explaining his desire to know the “why.” Sure, science can explain how, but shouldn’t what happens between the beginning and end have meaning? “I want to believe that this matters,” he tells us.

Driven by his quest for understanding Billy becomes a priest–the witty and brash, New York kind–equally ready to angrily question the heavens (“Half the time I don’t know what God is!”) as he is to cajole his mother to lower her prayer expectations.

What follows is either somewhat sad, or a joyous reminder of the importance of family. In other words, it’s a slice of life. It also marks the first time I recall hearing the expression “Go shit in your hat!” I hope it’s not the last.

I’m no theologian (yo), and each person who watches this gut wrenching play unfold will no doubt react differently. But at its core, it’s not necessarily about believing, or even faith really. Rather, it’s about love, understanding, compassion. All of the themes here are so elegantly interwoven and actor Tyler Pierce so adept at managing the proceedings it’s like watching Michael Tilson Thomas conduct Mahler’s Symphony No. 3 at the SF Symphony.

The acting is — this is beginning to sound like a broken record I know — outstanding. As the Thrust Stage quietly lay thick with emotion, I was thinking that this had to be some of the best acting on a stage, anywhere in the world, period. Linda Gehringer is phenomenal. It’s a knock-out performance that will surely bring on the awards. More than once, especially during the moving (albeit, slightly long) second act she had me a bit teary-eyed, myself thinking of my loved ones. The last time this happened I was watching Titanic on the big screen in Ottawa, circa 1997. I know, soft ice cream that I am.

It’s probably no secret where I stand on higher powers. I’m a huge fan of Christopher Hitchens (even more so the softer one that emerged after his cancer treatment), Richard Dawkins (in much need of a branding makeover). Darwin, of course. Kirk Cameron: not so much. But it’s my belief that in-your-face religion and in-your-face atheism are counter-productive. What’s more important is understanding, and the willingness to open ourselves to new ideas, perhaps at times against our most strongly held viewpoints. I’m not likely to have a deathbed conversion anytime soon, but it’s plays like these that really can open eyes. The theater: I thank you, once again.