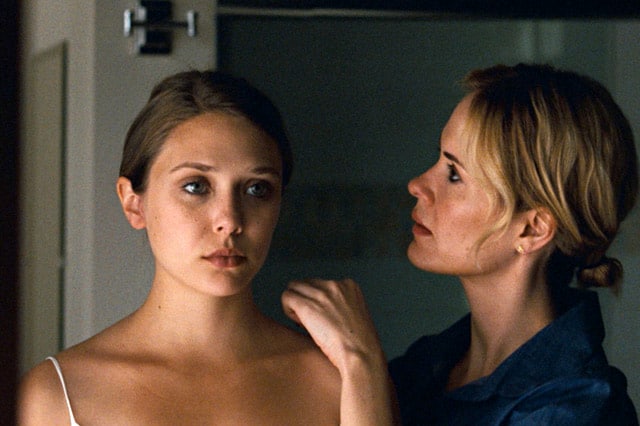 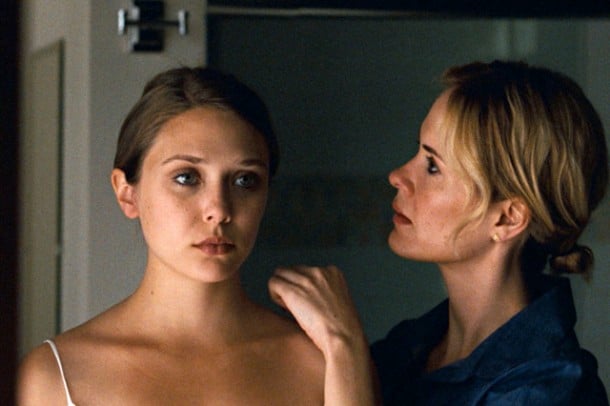 There are films that you watch and then there are films that you experience. Director Sean Durkin’s debut feature Martha Marcy May Marlene clearly and most comfortably sits in the latter. It’s a strikingly fresh, if not somewhat depressing, look at what film-making looks like without nauseating, rapid-fire edits. The psychological thriller which won best director at Sundance, though, will likely be most remembered for the making of a star in a remarkable lead performance by Elizabeth Olsen. Olsen twins who? The younger sister, 22, has spent all of one year in film, after working the theater scene, and her acting chops are the better for it.

I saw a screening of the awkwardly named indie at the Mill Valley Film Festival. On the surface it appears to be just another garden variety story about a girl escaping the clutches of a cult. And, yes, there are some familiar elements here including a creepily charismatic cult leader (John Hawkes), deconstruction and re-programming of the vulnerable, and a distraught family trying to sever the ties. But Durkin gives us something entirely unique. Many scenes move without dialog, simply relying on a slow camera, and soft soundtrack. The psychological forces at play here in this girl whose identity is in crisis oozed over the audience in a most uncomfortable way. And I loved it.

In addition to a patient camera, which Durkin frames in a most artistic and striking manner, there is a soft, even sometimes overblown look to the picture that is reminiscent of the 70s, but without requiring an overdose of Tarantino After Effects. Although the film is light years apart in subject matter and quality, being a horror fanatic I couldn’t help but notice the similarity of the rich graininess with films like Friday the 13th (especially the lake house scenes) and The French Connection. It’s a welcome throwback in style that eschews razor-edged HD digital sharpness in favor of haunting beauty.

Olsen delivers an effortless performance, showing terrific range in a story that requires her to be humiliated, sodomized, chased, controlled. Many are talking Oscar nomination, and it’s not a far-fetched proposition. Without her performance surely this film would be far less memorable. John Hawkes, too, burns up the screen- without ever entering cliched over-the-top evil cult leader territory. In Durkin’s world (he also penned the original screenplay) there are no black and whites; just when we think we’re getting to know the inner workings of a character, they take us in an unexpected direction.

I wasn’t alone in trying to grasp the meaning of the finale. In fact, an audience member at the talkback — which featured Olsen, Durkin Hawkes, and a producer — asked for an explanation. I don’t want to give anything away here, suffice to say Olsen indicated that it was the “perfect” place for the ending, and that it came naturally and no one so much as questioned it during script read throughs. It’s certainly true to Durkin’s vision, and the actions that precede it. That doesn’t mean it, nor the film entirely necessarily, will make for a perfect night’s entertainment. It all depends on your stomach for the grey, the dreary, the confused. And just like a cult (or “community” as the film-makers prefer to call it) its queasy and relentless grasp over your psyche will last longer than might like. Which is absolutely why I recommend it.