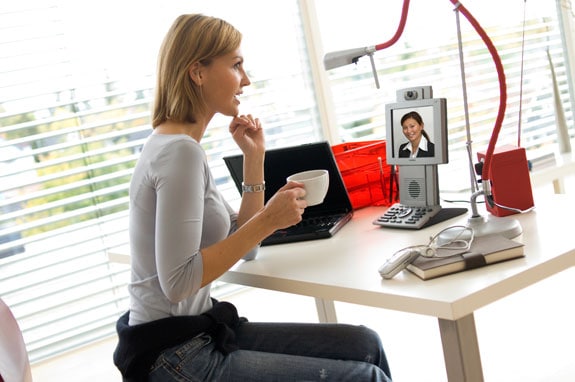 Welcome to another 5 Questions. Today’s topic is telecommuting, and Kim (Woodward) Decarlis, VP Corporate Marketing at Citrix, joins Stark Insider to discuss the trends, challenges, and opportunities arising from an increasingly mobile workforce.

Stark Insider: Hi Kim, thanks for spending time with Stark Insider. There was a time we used to call it “working from home”, but now it’s really working from anywhere. But with so much focus on virtual presence is there a risk that work teams will become less effective from lack of face time?

Kim Decarlis: It’s true that “workshifting” (that’s what Citrix calls the concept of “working from anywhere”) provides tremendous freedom and flexibility, enabling people to blend their professional and personal work styles to get more stuff done. While face time is important, technology can empower people to communicate and collaborate more often and with a broader group of colleagues – people who would otherwise rarely get together. And virtual technologies are getting better all the time, which means that this broad collaboration CAN include seeing a co-worker’s face! Last year our GoToMeeting online meeting service added HDFaces video conferencing, making it possible to see everyone’s smiling faces in high-definition, no matter where they are logging in from. With a combination of in-person and virtual collaboration, teams will become increasingly effective and productive.

SI:You mentioned GoToMeeting, with so much amazing technology available now — VoIP (like Skype), sip trunking, tablets, cloud computing — it seems like the office is quickly becoming a costly luxury. Or is it? Are there times when an office (or cubicle) still makes sense and should a company think about workspaces?

KD: Virtual technology can certainly decrease overhead costs associated with office space, since workshifters can often share a cubicle or workstation. That said, a physical workplace can play a role in establishing or strengthening a team’s culture and can be a great place for creative brainstorming or problem solving. Companies should always be thinking about ways to foster an environment that allows their individual employees to do their best work, whether that’s in the office, on the road or wherever they may be. Of course, Citrix empowers our employees to work from anywhere, but we’ve also invested significantly in more open and flexible offices spaces that enhance creativity and collaboration when people are in the office.

SI: There’s a huge green play here with remote or partially-remote employees. I’d imagine the gas savings alone could be huge – not to mention the environmental impact reduction. Is there a role for government incentives, or do you think that the natural competitive engine will result in the right outcomes?

KD: One terrific thing about workshifting is the extent to which it can minimize the environmental impact of commuting by taking cars off the road, decreasing gas consumption and reducing traffic congestion. In fact, a recent Electronics Association report estimated that 1.35 billion gallons of gasoline could be conserved annually if every U.S. worker with the ability to workshift did so 1.6 days per week. That is pretty staggering. While government incentives could help this cause, I believe it’s also important for individuals and their employers to start by assessing their workplace needs. If you have technology that enables you to do your job from anywhere, do you really need to drive to your office every day?

SI: From a management perspective things are certainly changing as well. Correct me if I’m wrong, but it seems as though the old days of sitting behind a desk, Michael Scott command-and-sort-of-control style, are fading. But that means communicating more via texts, emails, and even on social networks. What advice would you give to managers who need to manage geographically and/or remote teams?

KD: Powered by social media and other technologies, today’s virtual workplace can be one of the best experiences for managers and employees. Companies are now able to hire the very best talent, regardless of where the person resides, which in turn promotes job satisfaction and helps recruiting and retention. This is a win for both workers and organizations! Managers should take a good look at their teams and make sure they understand what motivates employees and when and how they produce their best work. In fact, Citrix surveyed employees earlier this year and found that a whopping 98 percent of respondents said they are at least as productive, if not more productive, when they aren’t in the office. This real-world data can be used by managers to put a workshifting policy in place that liberates employees while also driving productivity and business innovation. The key is to establish relationships of trust, and measure success based on objectives and output, not in-the-office time. This is true no matter where an employee sits!

SI: You recently spoke at the Work Anywhere Symposium in Sacramento. What are others saying, and what were the major themes/issues addressed?

KD: Yes, in September I was pleased to participate in the Work Anywhere Symposium in Sacramento hosted by The Telework Solution in conjunction with Sacramento State University. Other presenters included Scott McNealy, founder and former CEO of Sun Microsystems, Peter Ryce from Adobe Systems, Ian Gover from Better Workplace, California Congresswoman Zoe Lofgren, and noted telework experts from across the U.S. and Canada. The event addressed topics such as building a business case for workshifting programs, leveraging technology securely and effectively, and preparing the workforce for success.

The goal of the event was to help the state government understand how they can implement workshifting policies that will help the state run more efficiently and effectively. That may sound like a lofty goal, but what really shocked me was a study by Booz Allen that showed if half the workforce worked from home just one day a week, office space facility costs would be reduced by at least 10 percent. In the State of California that equates to $45 million, yet it is estimated that only 6,000 of California’s nearly 240,000 state employees workshift regularly. If you are familiar with the California state budget woes, you can imagine the significant impact just a small increase in the number of workshifters could make.

Ultimately, I think the takeaway from the event was that simple changes can lead to big solutions.

SI: Okay, Kim, now time for the lightning round! Because we like to talk food, wine, arts on Stark Insider, we must know: what is your favorite…

Wine – whose first responsibility is to be red! For me, that means Zinfandel from Ridge Vineyards, or their Monte Bello Cab/Merlot blend.

… thing to do in the Bay Area (arts/theater/recreation …)?

I love to take advantage of the varied outdoor activities…golfing at the Presidio, walking “The Dish” at Stanford, visiting the beach in Half Moon Bay. Oh, and going to farmer’s markets…as a cook and foodie, I LOVE the fresh produce available here…like nowhere in the world!

It’s a toss up between my Audi (the world’s largest blue tooth), my Leverpull wine opener and my iPhone. I finally switched when my Blackberry got thrown in the trash at a company picnic. It’s opened up a new world for me!