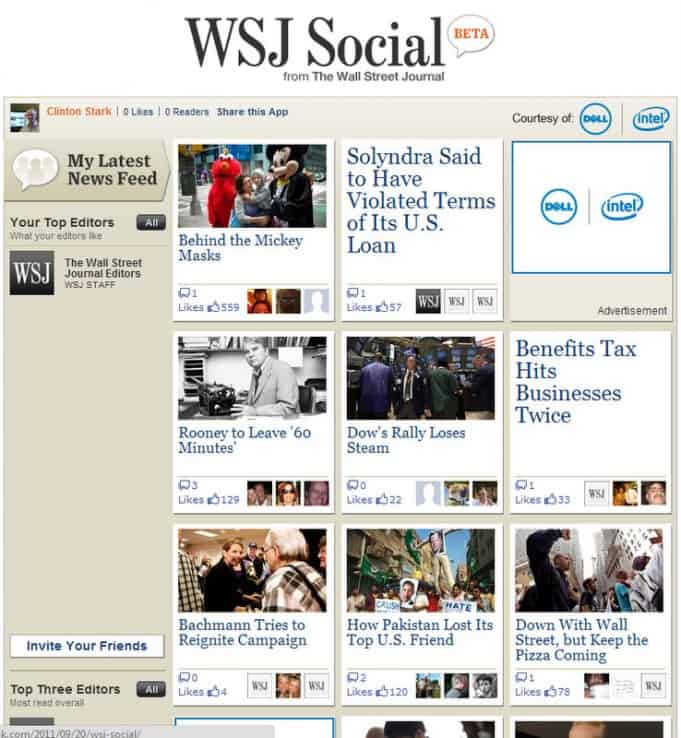 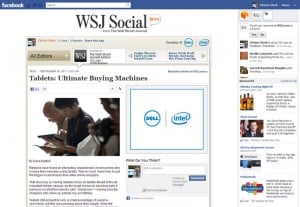 I finally had a chance last night to play around with the new Wall Street Journal Facebook app. In case you missed the news (on the news), WSJ yesterday announced that it had a new social app. What it is essentially is a page that uses the amazingly powerful Open Graph platform (a protocol that enables developers to integrate web pages into the social graph) to pull together a dynamic edition of the newspaper you can read without ever leaving the mega universe that is Facebook.

My gut reaction when I saw the email announcing the new app (“WSJ Social”) , urging me to give it a try was “Uh oh, this is going to change everything.” A day later I’m not entirely convinced that my knee jerk reaction was true. It’s not hard to forget that not everything FB touches turns to gold – Deals, Places, movie streaming (Batman?). Meantime as we’re being dazzled by all of these (admittedly incredibly cool) timeline, profile UI updates, The Company continues to assimilate our every waking move into the blue stream … including reading the news. Facebook is the new Second Life, but for real.

About that WSJ beta app. It looks a bit like Pulse, quite grid-like. When you first pull up the page on Facebook, the latest headlines are rendered in 12 tiles. From there it’s second nature. Click on a tile to pull up a story. Like it (surprise) if you will. Comment on it.

The Company wants us to live and breathe inside its increasingly suffocating world. Shop. Talk. Watch. Read. Listen.

Meanwhile, companies, including publishers like WSJ, that want to do business with Facebook to reach the masses- and they will because it’s the only game in town (at least until/if G+ reaches critical mass)- need to relinquish a fair amount of control.

Any fool can make a rule, and every fool will mind it.

These are interesting times. Social is the way to the consumer now, be it Twitter or Facebook. Companies used to go direct, or maybe engage some partners, and/or use their own online efforts like building a web site or an ecommerce platform. That’s changing. Fast. Business, and notably engagement, is happening in the cloud. The scary part of all that for publishers and other businesses is how to ensure the transaction, the profit comes back home.

2. The shakedown is innocent enough at first.

Just like Apple and iTunes, the margin seems somewhat absurd, but there’s not much choice. Then, all of a sudden – *boom*- we want a piece of your in-app purchases… yes we want some of that too. Regarding Facebook I’m thinking Zynga and FB credits. Everyone wants to own the money flow, then tax the hell of it like a utility.

All businesses want to minimize risks. Or at least take them when the rewards are potentially commensurate. The thing with FB is that you simply can’t ignore it. 800 million people now live in this virtual world — but the real version of virtual — so this is where customers live. And you thought Walmart was big.

The WSJ app on Facebook is possibly a harbinger of things to come. Already confused by this new world of freemiums, clouds, and blogs, mainstream publishers are turning to the iPad for possible salvation. But: Facebook? It’s a scary proposition. There might be upside, but everyone’s going to have to pay the man. 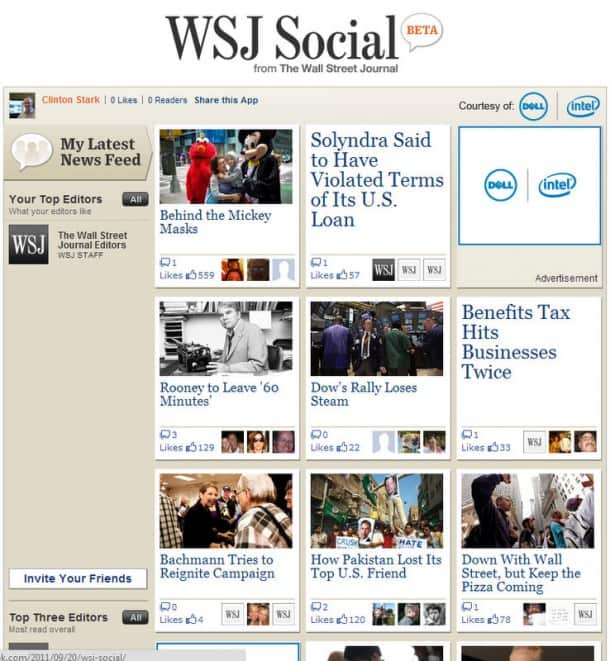