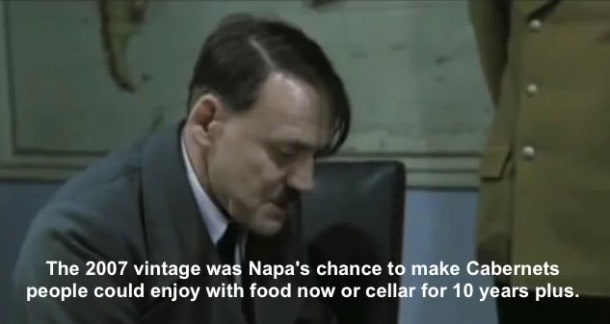 “Anyone who has replied to a thread on eParker.com in the last week, leave the room.”

Here’s a bit of a laugher for the wine crowd. I’ll be the first to question whether the world needs yet another Hitler reacts video, but I find them somewhat clever still- this one included. There are some good lines:

Plus, look for a funny mention of wine critics Bruce Sanderson (Wine Spectator) and Steve Heimoff (Wine Enthusiast). On the blogosphere front Dr. Vino gets a mention as well in relation to his examination of ethics.

Of course, Robert Parker himself receives the brunt of the Führer’s rage.

“I should have stuck with Bordeaux.”

And why does this video even exist?

As wineparadoy writes in the description on YouTube, “Because someone had to do it.”

Apparently it was created 18 months ago and never released: “But now that Robert Parker has appointed Antonio Galloni to replace him as The Wine Advocate’s critic on California wines, I decided to go ahead and post the video.”

Okay, it’s certainly wine geek territory here, but we’re kicking off the Labor Day weekend, and who can’t use a bit of a light-hearted hoot when it comes to criticism of the 100-point system?